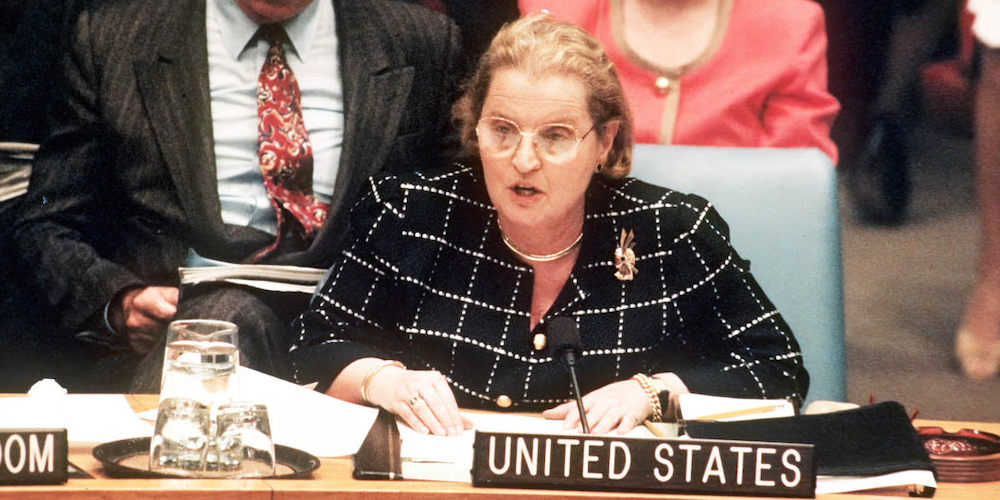 I never thanked her properly, figuring she had inspired many others to do greater things and wouldn’t be too impressed.

Madeleine Albright winked at me. Or did I imagine it? Why would the U.S. secretary of state wink at me, with dozens of fellow reporters and cameras in front of her? Perhaps the wink wasn’t intended for me. It wasn’t accompanied by a smile. Her face remained serious. We were in the Egyptian Red Sea resort of Sharm el-Sheikh, where she had just met with President Hosni Mubarak, in an effort to end the worst violence in the Middle East in four years.

It was October 5, 2000, the last day of my first trip with the secretary. Over the next decade, I’d take more than 100 flights with Albright’s three immediate successors — Colin Powell, Condoleezza Rice and Hillary Clinton. But that Thursday remains one of the most memorable days in my life — and not because of the wink. As we flew back to Washington after the stop in Egypt, Slobodan Milosevic, the Yugoslav president who had overseen the worst ethnic cleansing in Europe since World War II, was overthrown in a popular uprising. In the middle of trying to process the events in Belgrade and making frantic phone calls from the plane, Albright invited me to talk in her private cabin. Yes, she said, that wink had been for me.

I had met her less than a month earlier in New York. At 26, four years after moving to the United States from Bulgaria without knowing a soul, I rode the elevator in the Waldorf-Astoria hotel with a mix of conflicting feelings. Naturally, I couldn’t believe I was about to interview the secretary of state. Six years earlier, when I was a TV news reporter in Sofia, Albright had come on an official visit as U.S. ambassador to the United Nations. Although I was one of only a couple of reporters in the newsroom who spoke English, my editor didn’t want to “risk” sending me to cover Albright’s arrival, because I was too green. Now, however, I was confident and ready. Like many others, I was amazed that a refugee girl from Czechoslovakia had become the highest-ranking woman in American history, and the prospect of meeting her was intimidating. But in the land where she could reach such heights, someone like me having access to the secretary of state didn’t strike me as extraordinary.

After greeting me in what was the largest hotel suite I had ever seen, Albright settled comfortably on a sofa. My intimidation gave way to an odd feeling of kinship, which I rarely experienced with interview subjects. Must be the Slavic connection, I thought.

That interview was the first in a series for a profile I wanted to write in the Financial Times. I was curious how foreign policy-making had changed since the end of the Cold War. Albright said it was a much bigger challenge than during the period of East-West confrontation, when fear of a “basic evil” helped to create and maintain alliances. “Political Science 101 basically tells you that the goal of foreign policy is to protect your territory, your people and your way of life,” she said. “In terms of territory, the United States is still in the same place. But because borders are now very porous, the issues have to do with immigration, travel, health and environment, which were not considered classic foreign policy issues.”

As a graduate student at Harvard at the time, I had taken a course on the national interest, so I asked Albright how she defined it. “I believe the U.S. national interest is to try to have a world in which the United States feels comfortable promoting our ideals of democracy and free markets,” she said. “I think that certain geographic areas are very important to us because of their resource base, or their effect on our economy, or some of our larger strategic interests. But I also believe fully that we have humanitarian interests that rise to the level of national interests.” Having previously described the United States as “the indispensable nation,” she said she believed in “the goodness” of American power, “mainly because I’ve seen what a difference it can actually make. I also totally believe in the beacon of American democracy, and I don’t buy into the claim that democracy is only a Western value — it’s a universal value.”

For our second interview a couple of weeks later, Albright hosted me in her office at the State Department in Washington. She had just met with Peruvian President Alberto Fujimori. Since I’d join her for the first time as part of the “traveling press” on her plane the following day, I wanted to know how she saw the media’s role in foreign policy. “It has a big effect,” she said. “If you look back at how the press used to operate, there were only set briefings and plenty of time to write. Now, it’s a constant cycle. Some of it is very good, because you know what’s going on and there is a real-time sense about things. But it makes you have to respond to events much faster than it might be prudent, because facts may come in incorrect, but you don’t have time to put them in context, so you respond just to a little nugget of fact, and when you learn the context later, things change. So it’s a double-edged sword. It helps us when we need to get a message out quickly, but the boomerang effect plays a huge role.”

The trip started out as planned — first Iceland, then France. Our third interview took place in Albright’s hotel suite in Paris. After briefing me on the day’s activities, we returned to the topic of the traveling press. “We travel in a capsule together,” she quipped. “It’s funny because it’s like bringing your own problem with you, but I need you and you need me. You need me to be interesting in order to get a story. If I travel around and there is no press, who cares? So we are locked in this symbiotic relationship.”

Then events interfered with the rest of the trip. What would become known as the “second intifada” had broken out in the Palestinian territories days earlier, and with the bloodletting, calls for a ceasefire intensified. President Bill Clinton asked Albright to host talks between Israeli Prime Minister Ehud Barak and Palestinian leader Yasser Arafat at the U.S. ambassador’s residence in Paris. Albright decided that, as planned, we’d go to Germany for the celebration marking the 10th anniversary of the country’s reunification on October 3. But instead of returning to Washington, we’d fly back to Paris and on to Egypt.

The meetings with Barak and Arafat failed to achieve a ceasefire. In Egypt, Albright faced obviously hostile Arab reporters. And then we got the news about Milosevic’s ouster on the flight back to Washington — that, she told me in her cabin, was “the most important thing” during her entire tenure. It was obvious that she loved being America’s top diplomat. “It’s so much fun, and very energizing,” she said, “and I think I’ve had a pretty good run. But we all occupy these jobs temporarily.”

The hardest part of her job, she added, had been “working with some of the men — I’ve had an easier time with the foreign men I deal with than the Americans, because, for the foreigners, I am the United States. That’s why I probably work as hard as I do. Men tolerate each other talking for a long time, but not women, so I’ve tried to make my arguments as succinct as possible. It’s hard to sit in a principals meeting, with some of the men wearing uniforms and all that junk they have on — it’s very off-putting.”

Earlier in the year, I had interviewed Condoleezza Rice, at the time the chief foreign policy adviser to the Republican presidential campaign of George W. Bush. Rice had told me about her professor at the University of Denver, Josef Korbel, who was Albright’s father. “I know and like Madeleine very much,” Rice said. “You can have the same intellectual father and different outcomes, but there are some powerful core values that we share. On issues of how you use power, we probably don’t agree.” As it turned out, Albright had read that interview. “I laughed about the fact that we have the same father,” she chuckled.

I saw Albright many times in the two decades since she left office, including when I covered and traveled with Rice. But that first trip in 2000 inspired my deep interest in the U.S. Foreign Service, which has preoccupied my career since then, albeit from the outside. I wrote a book about it, and after eventually leaving journalism, founded the Washington International Diplomatic Academy, where career diplomats with decades of experience provide practical training in diplomatic tradecraft. I never told her about that inspiration — at first, I thought it was inappropriate to gush as a journalist, and later I figured she had inspired many others to do greater things and wouldn’t be too impressed.

A couple of hours after Albright took her last breath on Wednesday, one of her closest friends and colleagues told me something she never said: “She saw a bit of herself in you.” A part of me was surprised, but the other part wasn’t. Perhaps there was more than the Slavic connection.