Why Immigrants’ Children Are a Diplomacy Asset

As an Asian-American intern at the State Department, I questioned if there was a place for me in the U.S. diplomatic service. 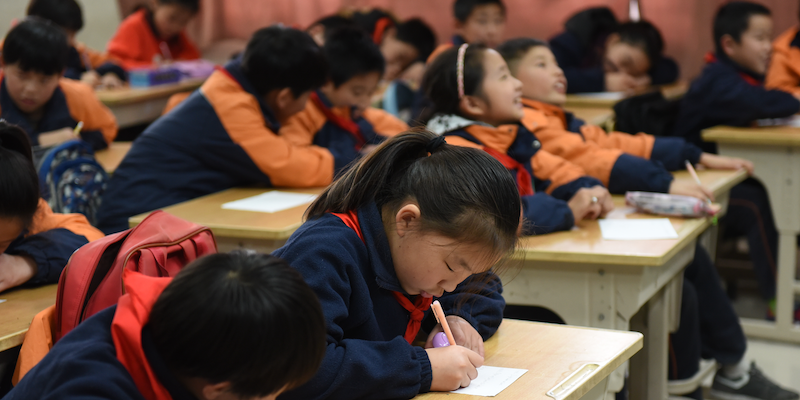 In 2017, Chloe Chang interned with a nonprofit focused on equal access to education for children of migrant workers in China. Photo courtesy of the author.

As a Taiwanese-American, I thought I was taking a risk when I decided to spend a semester in China as a college student in 2017. Having never been there before, I was apprehensive about putting myself in a vulnerable space, potentially inviting the scrutiny of both peers and locals. But once there, I quickly realized that my Asian-American identity was an asset. As I built relationships with Chinese students, it was easy for me to communicate, understand and empathize with them. I found myself straddling two worlds with almost opposite views and cultural values — and in that tension, I saw a place for myself in the world of diplomacy, to which I had gravitated from an early age, as a bridge-builder.

A harsh dose of reality, however, set in just six months after I came home. My enthusiasm at the start of a much coveted internship at the State Department in Washington was tempered when I discovered that no one in the office looked like me. Throughout my time in the Bureau of Conflict and Stabilization Operations, I rarely spoke with anyone who wasn’t white. Perhaps there wasn’t a place for me in American diplomacy, I thought.

My next internship, at the U.S. Agency for International Development (USAID), revived my hope. It was the first time I worked with other Asian-Americans, including my office director, who was in the senior Foreign Service. The insight and career advice she gave me, as well as her willingness to share the challenges she had overcome with tenacity and creativity, were invaluable. As she showed me a professional path forward, I recognized the critical importance of representation and mentorship for people of color who don’t usually see themselves in leadership positions.

On paper, the number of Asian-Americans working in the State Department is similar to the size of the Asian minority among the U.S. population, which is 22.6 million, or 6.9 percent, according to the U.S. Census. The percentage in the department is actually 7.3, though in the senior Foreign Service, it’s only 3.6. The USAID numbers aren’t too different. However, Asians are the fastest-growing major racial or ethnic group in the United States — their number increased 72 percent between 2000 and 2015, according to the Pew Research Center. In addition, a Government Accountability Office report this year pointed out that Asian-Americans are particularly underrepresented at USAID in such areas as health, contracting, program or project development, auditing, and management and program analysis. The problem of retention and promotion of Asian-Americans is acute in the State Department and USAID.

My internships opened my eyes to much more than the lack of diversity. My time at the State Department gave me insight into the inner workings of the government and foreign policy. I helped draft talking points for speeches, recommended outreach opportunities for senior officials, researched peacekeeping operations metrics for inclusion in reports, and led the creative design of two publications on monitoring and countering violent extremism. I saw a lot of the bureaucracy, and at times I felt far removed from the situation on the ground overseas. I thought that policies were often recommended without some of the local context, which I believe is crucial.

The USAID culture was very different, with a greater desire to understand local needs. I had an especially useful perch for observation while interning in the Office of the Inspector-General, working on measuring the impact of USAID’s activities. But my impression was that the agency took a step back when it came to project implementation, acting more as an overseer of various projects outsourced to contractors. So it’s hardly surprising that I ended up working for one of those contractors after college.

My interest in diplomacy was neither typical nor encouraged as a child of immigrants from Taiwan, who considered medicine, law and engineering much more prestigious professions. None of these options appealed to me — instead, my shared experiences at an international school with diplomats’ children and having a diplomat-relative nudged me in a very different direction, which my experience in China and my internships helped me embrace.


I see diplomacy as a natural career choice for an Asian-American. Building bridges comes instinctively to the children of immigrants. Even though my Mandarin skills weren’t as good as those of other American students in China, I understood much better the nuances, cultural references and significance of my interactions with local students. I recognized that, while American culture generally celebrates independence and individuality, Chinese culture honors sacrifice, community and selflessness. As a product of the two cultures, these apparently irreconcilable differences made sense to me. Diplomacy needs people capable of “code-switching” — shifting between contexts, languages and cultures — to foster relationships and effective dialogue.

One of the best ways to increase the number of Asian-Americans in diplomacy is to leverage the existing employee affinity groups at the State Department, the Asian-American Foreign Affairs Association and the South Asian-American Employee Association. The former spent years working to resolve a salient problem — overseas assignment restrictions in the Foreign Service that disproportionately affected employees of Asian and Pacific Island descent, especially regarding service in China. In 2016, the department published new guidelines in the Foreign Affairs Manual, bringing greater transparency, accountability and fairness to the assignment process.

President-elect Joe Biden and his recently announced senior team have vowed to address the lack of diversity in diplomacy early on in the new administration. Asian-Americans have been often overlooked in such conversations in the past, and there is no better time for that to change than today.

Chloe Chang is a senior associate at Chemonics International, a USAID contractor, where she works on a global health and supply-chain project.