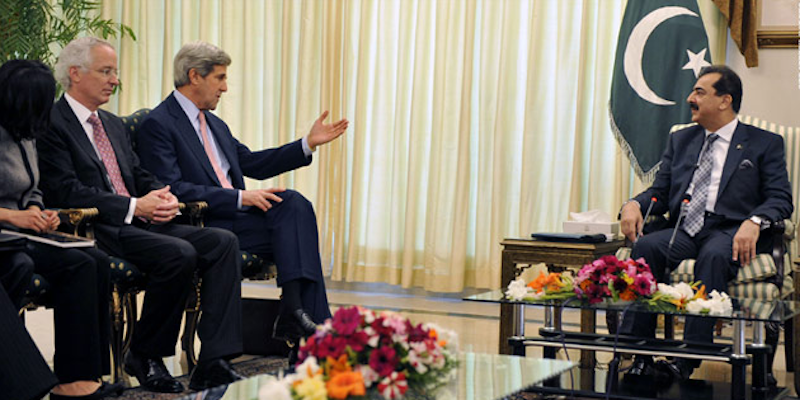 Deputy Chief of Mission: The Toughest Job in an Embassy

The main challenge is managing an interagency team that is uniquely disparate, in an environment vastly different from a typical workplace.

For American diplomats who have served in Iraq since the 2003 invasion — particularly when the country was still an active war zone — most days during their tours were challenging and fraught with security risks. For Cameron Munter, however, one of the most jarring days while serving as deputy chief of mission at the U.S. Embassy in Baghdad in 2010 had nothing to do with the dangerous environment.

A new member of the embassy staff arrived on a Friday. On Sunday morning, after an apparent night of drinking, he was found “in a stairwell, naked, lying in his own urine,” Munter recalled. So he sent the new employee right back home. “He said, ‘Give me another chance! Someone must have drugged me when I was having a drink.’ I said, ‘Maybe, but I’m not going to risk it.’ We had no choice in Iraq.”

Most U.S. diplomats consider deputy chief of mission, known as DCM, to be the hardest job in any embassy, not just the one in Baghdad, said Nicholas Kralev, who interviewed hundreds of Foreign Service officers while researching his book “America’s Other Army.” Some of them now teach at the Washington International Diplomatic Academy, which Kralev directs. He noted that, since at least a third of U.S. ambassadorships — or chief of mission positions — go to political appointees, DCM is as high as many senior career diplomats aim to rise in the hierarchy.

Several retired officers with both DCM and chief-of-mission experience explained the difficulty of the position in interviews last week. Munter was also DCM in Poland and the Czech Republic, as well as ambassador to Serbia and Pakistan. He pointed out that the DCM job can differ from post to post, depending on the mission’s size, the host-country and the ambassador, among other factors. Generally, the ambassador is the public face of the embassy — and the United States — while the DCM manages the day-to-day operations. The first time Munter was DCM in Warsaw, he said, “I was Mr. Inside,” and the ambassador was “Mr. Outside,” which didn’t mean that “I was cut off from the outside world.”

Charles Ray, a former DCM in Sierra Leone and ambassador to Cambodia and Zimbabwe, agreed. “There is no doubt in my mind that DCM is the most difficult job in an embassy,” he said. “The DCM is responsible for managing the embassy, kind of like a chief operating officer, but without the authority that most COOs have. The DCM’s authority, for the most part, comes from the ambassador, and an ambassador with poor leadership skills can make a difficult job even more so. A DCM has to be good at policy, but most important, he or she has to be good at resource management — skills that the Foreign Service doesn’t value or stress nearly enough.”

The way Lisa Kubiskee, a former DCM in Brazil and the Dominican Republic and ambassador to Honduras, sees it, the DCM has two main jobs: managing up and managing down. “You are taking care of the ambassador, and you are also managing the staff under you,” she said. “If things go wrong, it’s on you. But when things go right, you are not usually the one who gets the credit — it’s the ambassador.”

For that reason, Ray said, he made an effort to give more credit to his DCMs when he became ambassador. “I had four DCMs during my two tours as an ambassador, and I valued each of them,” he said. “I can’t say that I made their job easier, but I did my best not to do anything to make it any harder. Each of them was given clear authority to manage the post, and full credit when things went well.”

The main challenge for any DCM is managing an embassy team that is uniquely disparate, in an environment vastly different from a typical workplace, Kralev said. In addition to the State Department, the staff comes from as many as a couple of dozen agencies of the U.S. government, which often have competing agendas. So their representatives have split loyalties, in a way. On one hand, they are in the host-country under the authority of the chief of mission, but on the other, those from agencies such as the Departments of Defense and Justice still report to their bosses in Washington.

Moreover, diplomacy is not just a job or career — it’s a way of life, Kralev said. You move around every couple of years, on average, which some spouses and children find disruptive or worse. The DCM has to take care of the entire embassy community. Making sure employees perform well at work, and helping those who don’t, is just part of the job. Another part is providing the necessary living conditions and a safe environment. Add to that the need to resolve a myriad of personal problems, such as a death in an employee’s family, a painful divorse or alcoholism, Munter said. Unlike service in an active war zone, sending someone home is rarely the solution, and you have to make it work at post, he added.

James Zumwalt, a former DCM in Japan and ambassador to Senegal, recalled a former subordinate who had been caught shoplifting. “She was a good employee, but obviously she had some kind of serious issue,” he said. “I worked hard to make sure that this wouldn’t happen again, and that she had learned her lesson.” Zumwalt quipped that many Foreign Service officers think that DCM is the second-hardest job in an embassy — after whatever job they themselves are doing at the time.

Managing up can be as challenging as managing down for a DCM, several former diplomats said, especially if you have a problematic ambassador — whether an unqualified political appointee or someone from the career ranks without sufficient leadership experience. There are “good and bad ones in both categories,” Kubiske said. Ray worked as DCM under two career ambassadors, and they had “entirely different leadership styles and personalities,” he said. “Even with an ambassador who is a good leader, the job is still hard.”

In the last half-century, both Republican and Democratic presidents have appointed unqualified but politically connected or wealthy ambassadors, usually to developed countries in Europe and Asia. Many of them have come to respect the Foreign Service, but few have made the lives of career officers — DCMs in particular — miserable, Kralev said. More political ambassadors fired their DCMs during the Trump administration than during any other administration in recent memory, he noted.

Lewis Lukens was one of those DCMs. Having served as ambassador to Senegal, he was already the deputy in London when Trump’s ambassador, Robert Wood Johnson, arrived in 2017. Johnson is a billionaire heir to the Johnson & Johnson pharmaceutical fortune. He was “inexperienced, but thought he knew everything, because he thinks he’s been a great success in life,” Lukens said. For months, Lukens “acted as a buffer” between Johnson and the mission’s staff, “essentially protecting the embassy from some of his more outlandish demands.”

Then in 2018, at Trump’s direction, Johnson pressured his staff to lobby the British government to select Trump’s Turnberry resort in Scotland as the site of that year’s British Open golf tournament. Lukens opposed such a move as unethical, but Johnson did the lobbying himself. Later that year, Lukens mentioned in public speeches his experience hosting then-President Barack Obama in Senegal in 2013. Johnson branded him as a “traitor” and fired him. That ended Lukens’ career, a decade before he would have had to retire from the Foreign Service.

Munter said he was “very fortunate” that he first served as DCM under “a career person whom I knew well and who trusted me.” That ambassador, Christopher Hill, taught him how to build a strong relationship with the embassy’s management section. “You are utterly at their mercy” in order to be able to function, Munter added. While still in Warsaw, he also served under a political ambassador, former Knoxville, Tenn., mayor Victor Ashe. A novice to diplomacy, Ashe was “grateful” to learn how the system worked and “didn’t boss you around,” Munter said, which was “most of my experience with political appointees.”

Both Munter and Ray said that, when it comes to preparing Foreign Service officers for their first DCM assignment, the State Department has a significant weakness. Most officers who have spent their careers only in the political or economic career track rise through the ranks with little management experience.

“If earlier in my career, I had been sent to be a general services officer in the management section in, say, Kazakhstan, and I’d learned how to fix people’s toilets, it probably would have prepared me better to be DCM in Warsaw,” Munter said.

Sal Cerrell is an intern at the Diplomatic Diary.