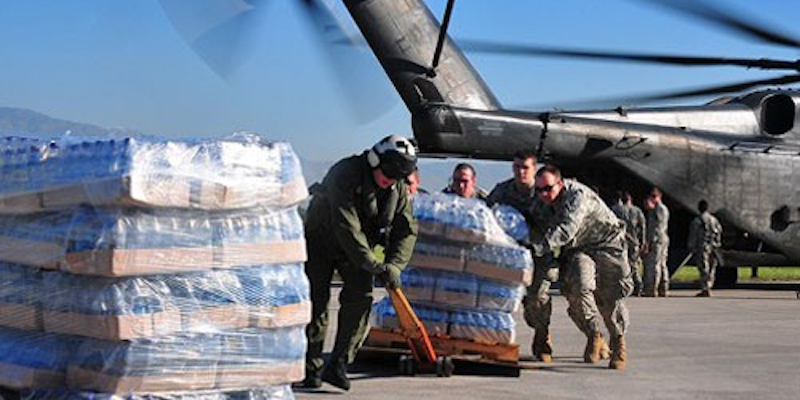 History Shock: Too Many Diplomats Are Ignorant of the Past

The lack of knowledge and understanding of other countries’ histories — and the U.S. role in them — burns bridges and impedes diplomacy.

It was the last thing I expected. But I should have known better. As the U.S. Embassy in Haiti mounted a Herculean effort to help the country recover from a devastating earthquake in 2010, hundreds, if not thousands, of reporters from around the world were calling both Port–au-Prince and Washington for updates on the relief operations. Four days after the disaster, which killed as many as 300,000 people, a Nicaraguan journalist called me at the State Department, seeking reaction to a claim by Nicaraguan President Daniel Ortega that the U.S. military was about to occupy Haiti.

I headed the public diplomacy office in the department’s Bureau of Western Hemisphere Affairs at the time. After explaining to the reporter that American forces were assisting Haiti at its government’s invitation, because only they could handle the catastrophe the quake had caused, I thought I had provided a forceful rebuttal to what I believed was a preposterous claim.

Within days, however, the false alarm had spread across the hemisphere, with another anti-American authoritarian leader, Hugo Chavez, joining in the chorus. Many people, aware that the United States had occupied Haiti from 1915 to 1934, saw plausibility in a similar scenario in the earthquake’s aftermath. I, on the other hand, didn’t know of that history — and if someone like me, with a degree in history and a former teacher, didn’t know, what about the other thousands of Americans representing various government agencies in Haiti?

The occupation narrative didn’t go away for weeks, in spite of numerous statements and interviews by U.S. officials in Haiti, Washington and many other countries. It distracted public attention from the much more important story for the United States, which spent billions of dollars and provided unparalleled expertise to the hemisphere’s poorest country.

The episode was the culmination of a growing uneasiness I had experienced in my overseas assignments related to understanding history — or the lack of it. I was either unaware of the history of my host-country and its relations with the United States, or I had a very different understanding from my hosts. I came to call this sensation “history shock” — unlike culture shock, which one expects and prepares for as a diplomat, I never anticipated the differences related to history.

As I delved into the history of U.S. relations with the countries where I was serving, one question kept recurring: How come I didn’t know this before? Unaware of the Haiti occupation in the early 20th century, I didn’t know about U.S.-perpetrated atrocities, either, even though they had been investigated by Congress. I don’t recall learning in any course I took or taught that the Americans burned the city of York (now Toronto) before the British burned Washington D.C. during the War of 1812. I hadn’t heard of then-President Theodore Roosevelt’s blatant grab of Panama — manufacturing a revolt against Colombian rule to justify sending in American forces to restore order, so he could build a canal across the isthmus, having been denied permission by the Colombians.

It was a maneuver repeated later in the century in Guatemala, Nicaragua and Iran, and attempted at the Bay of Pigs in Cuba. I should have known how prominently the so-called Platt Amendment played in Cuba, but my knowledge of the Spanish-American War of 1898 was limited to Roosevelt and the Rough Riders. Enacted after the war, the Platt Amendment gave the United States control over Cuba’s foreign and even domestic policies when Washington deemed that U.S. interests were affected. It stood until 1934. “Platt” became shorthand across Latin America for U.S. interventionism, a term that Fidel Castro used repeatedly as he took power in Cuba in 1959.

I didn’t know that Malcolm X had been to Nigeria in 1964, and his criticism of American diplomats trying to sugarcoat race tensions in the United States still resonated with the Nigerians we at the U.S. Embassy interacted with 20 years later. Nor was I aware that the state of race relations in the United States was recurring fodder in Soviet anti-American propaganda in the 1950s, and was one of the arguments in favor of eventual passage of the Civil Rights Act in 1964.

All these incidents led me to explore further the connection between history and foreign relations, and between history and memory. After I retired from the Foreign Service in 2010, I enrolled in a graduate history program at the University of Massachusetts at Amherst and wrote a book, “History Shock,” as a way to come to terms with my personal experiences, which many colleagues, as well as non-diplomats, have told me are similar to theirs. Not that hearing that has been especially comforting. We see examples of history shock almost every day. In the current impasse with Russia over Ukraine, President Vladimir Putin is drawing on his own version of history of the end of the Cold War to justify his threatened invasion, citing an out-of-context 1990 remark by then-Secretary of State James Baker about NATO advancing “not one inch” eastward after the reunification of Germany.

Friends and acquaintances outside of diplomacy have told me they were appalled that the United States has career diplomats so ill-versed in history. Several historians who reviewed my book noted that this reflects the lack of historical awareness more broadly — in the U.S. education system and across our society — a reminder of what the author Gore Vidal called the “United States of Amnesia.” I do realize, of course, that it’s impossible for Foreign Service officers to know in depth the history of every country at the beginning of their careers.

There are various reasons for the “amnesia.” One is that ours is a culture that looks forward, not backward. We are a society that has built a narrative that we are an exceptional and indispensable nation, and we choose to forget events that don’t fit that view. In addition, our government has decided to move Foreign Service members around every couple of years, which is more frequent than any other country and makes it difficult to develop a truly in-depth understanding of the host-country — American politicians believe this is better than becoming too close with foreigners. The Foreign Service prioritizes generalists, rather than experts, and formal training is insufficient. I had about eight months of training in my 26-year career. That leaves learning about the host-country entirely to individual officers.

Last week, the United States accused Russia of sending saboteurs to engineer a crisis in Ukraine and use it as a pretext for military intervention. The Kremlin could certainly bring up historical examples of similar U.S. actions, such as Roosevelt’s grab of Panama. By acknowledging the history of our falling short of our ideals, we can reduce tensions. By acknowledging the history that is important to our counterparts, we can build bridges. By being aware of the gap in interpretations of the same events, we can work to find common ground.

John Dickson is a former Foreign Service officer. During his 26-year career, he was deputy chief of mission in Mexico and Canada, and also served in Peru, South Africa and Nigeria.

This article is an adapted excerpt from his book “History Shock: When History Collides With Foreign Relations.”