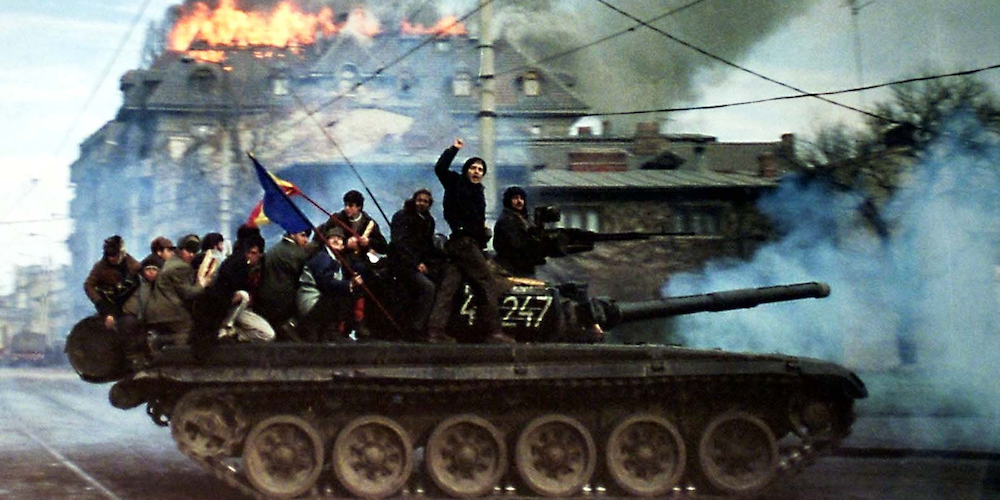 One was caught up in Romania’s 1989 revolution. Another used the holiday to show support for political prisoners in Cuba.

Virginia Carson Young spent two decades as the wife of a Foreign Service officer. After her husband died in 1972, she joined the service herself in her mid-40s. In 1989, she spent a very unusual Christmas, even by the peculiar standards of diplomats, who often find themselves in far-flung parts of the world, away from family and friends. Young, who died at 93 from Covid-19 last year, was one of several former officers who recounted unique Christmas experiences in oral histories recorded by the Association for Diplomatic Studies and Training (ADST).

Young headed the consular section at the U.S. Embassy in Romania when the Berlin Wall fell and communists regimes across Central and Eastern Europe collapsed. In Romania, mid-December protests by the country’s Hungarian minority snowballed into a revolution, with Romanians openly booing Nicolae Ceausescu, the country’s brutal longtime dictator, during a December 21 speech. The boos turned into a revolt that night. Young and about a dozen staff and another dozen visa applicants were at the embassy when the violence began. Surging crowds and gunfire lead the security officers to close the building and order everyone to stay in place. No one knew exactly what was happening, she recalled.

“The Romanian [applicants], of course, were quite tense and fearful,” she said. “We had a consulate Christmas tree that we had not decorated, so in order to pass the time and keep people calm, I said, ‘Let’s decorate the tree.’ I was talking to a friend afterward and said, ‘In the movie of my life, this is the time I’m going to be played by Ingrid Bergman.’”

Although Young went home that evening, she and about 20 colleagues slept on the floor of the embassy during subsequent nights, part of the “bare-bones” team left after the State Department evacuated all family members and many American staff from the country. When things calmed down enough to go home for a few hours for supplies, she found bullet holes in her terrace door. “My particular job was locating American citizens and reporting back to their families that they were all right, or not all right,” she said.

On Christmas Day, a military court tried Ceausescu and his notorious wife Elena on multiple charges, including genocide. Found guilty, they were executed that day. Young wrote about her career as a consular officer in her book “Peregrina: Unexpected Adventures of an American Consul.”

In another dictatorship half the world away in the early 2000s, James Cason used Christmas to highlight the lack of freedoms in Cuba by bringing attention to the plight of 75 arrested political prisoners. He was chief of the U.S. Interests Section (USINT) in Havana, the de facto embassy before diplomatic relations were restored in 2015. “Christmas was not celebrated in Cuba,” Cason said in an ADST interview. “I bought 5,000 meters of rope lights and turned the whole USINT building into a giant Christmas decoration. A donor provided a 30-foot Santa and snowman. I got outside funds for a Rudolf the Red-Nosed Reindeer for the side of our building pulling a sleigh. We filled the grounds with giant candy canes, bells and other Christmas ornaments, and put in a manger and menorah to boot. It was very colorful, bright and beautiful and could be seen from a mile away.

“People started coming from all over Havana to look at it, whispering to their kids that this was what it was like before the revolution. And in the midst of it all I put a giant 75, which really pissed off the Cuban government.” Cason ignored the regime’s demands to take down the decorations, so it hit back.

“The Cubans put up enormous loudspeakers in front of USINT and put up a 100-foot-high banner on an adjacent apartment house that depicted me as Santa, on a sleigh pulled by 12 Marines, dropping bombs on Iraqi kids,” Cason said in refernce to the 2003 U.S. invasion of Iraq. “They played the same song at 1,000 decimals, from eight to nine [in the morning], 12 to one, and four to five [in the afternoon]. Our windows shook, but so did those in the populous neighborhood. We did not protest. After several days, the neighbors protested and the [government] desisted.”

More recently, on December 22, 2017, many embassy staffers in Kosovo had taken leave, and some had left the country. Even though some in the Muslim-majority country celebrated Christmas in December, the parliament met that day and planned a vote to abolish the Special Courts of Kosovo, also known as the Kosovo Courts, established to investigate and prosecute war crimes committed by or against citizens of Kosovo during its 1998-2000 conflict with Serbia. The United States, the European Union and other countries supported the courts, because they aimed to ensure accountability for human rights abuses.

Alerted about this potential vote just hours before it would take place, the U.S. ambassador at the time, Greg Delawie, and a handful of Foreign Service officers and local staff worked through Christmas Day to save the courts. Rallying allies, meeting with members of the government, reminding people about parliamentary procedures and going public with objections to ending the courts helped stall the bill before the parliament went on winter break. Private and public engagements during the break ensured that the bill failed when brought back in January.

“It was ultimately a successful effort,” Delawie told ADST. “But it was the kind of thing where you have to rely on people that have experience, country knowledge and people knowledge, and use these skills to achieve an American goal.” It would take almost four more years for the courts’ first trial to begin last September.

Long before social media changed the definition of “viral,” Foreign Service officers were advised never to write something they wouldn’t want to see on the front page of the Washington Post. In 1980 in Ireland, press attaché Robin Berrington found himself in the papers on both sides of the Atlantic, including the Washington Post, after someone leaked portions of a personal Christmas letter he sent to friends and family. Not fond of the often-rainy weather, nor his job, he described the country as gray and dreary, and his work as “small potatoes.”

About a month later, the Irish Times, other local newspapers, the Associated Press, and the New York Times wrote about his “insults” and the backlash they engendered in Ireland. ABC’s news anchor Peter Jennings read parts of the letter on his evening broadcast. The Christmas letter literally caused a diplomatic incident. Berrington said the published excerpts were taken out of context, and later media reports echoed that statement, with one Irish paper printing the entire letter to show it was not a snub. Several Irish journalists even wrote to U.S. officials praising Berrington’s work in the country. Nonetheless, “I was told that the State Department wanted me out of the country, that I had become so much of a point of controversy that it would be best if I left and was out of there, so that there would be no more concern about this.”

Few diplomats send old-fashioned letters today. The pandemic has prevented many of them from returning home again this year. As they write to family and friends on various hi-tech platforms, it might be wise to keep in mind that one never knows where their messages may end up.

Although Berrington went on to have a successful Foreign Service career despite the 1980 incident, “in a way, that letter has haunted me for the rest of my life,” he said.