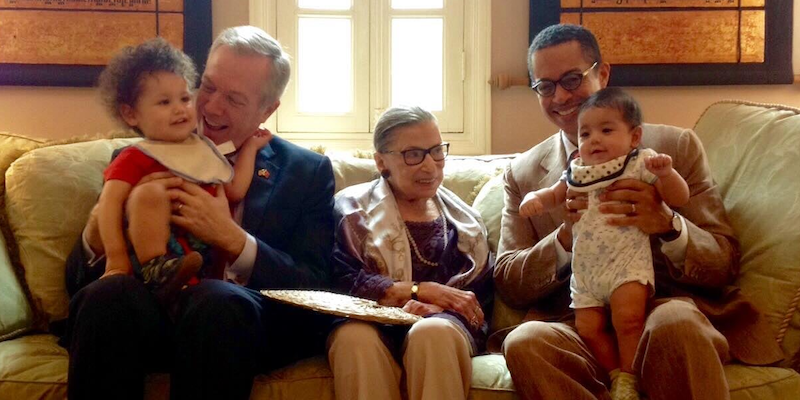 A 100-Day Plan: Getting Ready to Become an Ambassador

How creating opportunities for junior diplomats well above their pay grade shapes future chiefs of mission.

When a country’s ambassador to the United Nations sits at the famous Security Council horseshoe table, the first of the staff seats behind the principal is usually reserved for a senior adviser. In the U.S. case, that is typically the political counselor of our U.N. mission. Yet here I was, still a fairly junior diplomat, perched in the hot seat behind Madeleine Albright, President Bill Clinton’s first ambassador to the world organization in New York. The political counselor at the time, Cameron Hume, had made a practice of giving this rare opportunity to what we called action officers. When Albright turned around to ask a question or seek advice on an issue, she was faced with one of us.

Every time I was assigned to the hot seat, I knew I had to master the subject before that council meeting. If a Cabinet-level official like Albright was potentially going to use my words, they had to be accurate, because they could become U.S. policy. Hume, who ended up spending more than four decades in the Foreign Service and had three ambassadorships, was still in the room as backup and for matters that required more experienced judgment. But each action officer knew that they had to be thoroughly prepared.

That experience informed how I relied on my action officers when I became ambassador to Vietnam nearly two decades later, in 2014. My deputy chief of mission, Claire Pierangelo, and I made certain that junior officers “owned” their portfolios. We let them know that they could still seek guidance from their direct supervisors or from us, but we trusted that they would bring good ideas and their own deep knowledge of the issue at hand. Working with Hume during three Foreign Service tours had taught me that, when a diplomat designs and implements a strategy — and sees it through to completion — he or she is changed in the process.

I had also taken advice from another highly experienced career diplomat before I arrived in Hanoi. During the so-called ambassadorial seminar, known affectionately as “charm school,” William Burns, at the time deputy secretary of state, said, “Create a plan for the first 100 days of your tenure as ambassador, as you’ll be amazed how quickly your tour will go by.” One of the most highly regarded Foreign Service officers and former ambassador to Russia and Jordan, Burns is currently director of the CIA.

Burns’ advice reminded me of another lesson I had learned from Hume, who had said years earlier, “If you want to do something important and meaningful, you need to get it moving at the beginning of your time as ambassador, because most significant initiatives take at least two or three years to complete.” When Hume was ambassador to South Africa, he chose three big goals and pursued them energetically. As ambassador to Indonesia, he created a comprehensive partnership launched by then-President Barack Obama.

My immediate predecessor in Vietnam, David Shear, had established a framework for a comprehensive partnership, which Obama and Vietnamese President Truong Tang Sang announced in 2013. If it was to last, this initiative needed substance. Before I left Washington, I created a 100-day strategic plan for my new mission organized around five themes to deepen our partnership: strengthening the commercial relationship while pressing Hanoi for further economic reforms; increasing Vietnam’s respect for the rule of law and human rights; expanding security ties; enhancing educational exchanges; and carving out areas for productive collaboration on health and the environment.

When I arrived in Hanoi, my plan in hand, I discovered that Vietnamese leaders had their own plans and strategies for where we needed to focus our energies. Their plans came from Vice Minister of Foreign Affairs Hà Kim Ngọc. A talented diplomat who later became Vietnam’s ambassador to the United States, Ngọc advocated for a visit to Washington by the general secretary of the Communist Party, Nguyễn Phú Trọng, as a way to transform the relationship. I heard this from other leaders as well, but I didn’t initially recognize the proposal’s significance. Some observers thought that Trọng would soon retire. I believed these erroneous predictions and thought that the State Department — not the embassy — would sort out a potential visit.

Weeks after I arrived in Hanoi, at a conference celebrating the 20th anniversary of U.S.-Vietnam diplomatic relations, Ngọc also proposed that our comprehensive partnership be transformed from one of bilateral cooperation to one of regional and global collaboration. That’s what we would accomplish in the next three years, especially in the areas of peacekeeping, nonproliferation, climate change, global health challenges and biodiversity. At the same conference, the first U.S. ambassador to Vietnam, Pete Peterson, summarized his views on the future: “Nothing is impossible in the U.S.-Vietnam relationship.” I decided to make his statement the leitmotif of my ambassadorship.

An embassy tends to be structured around the work of different government agencies and sections. Instead of having senior staff members operate in silos, I organized our work around the five themes of my strategic plan: economic engagement, human rights, security ties, educational exchange, and health and the environment. This meant that the efforts of all our diplomats, our public activities and internal working groups had to remain focused on those themes, regardless of agency affiliation.

When I wrote my 100-day plan, I expected that speaking in Vietnamese and respecting the nation’s traditions would be received well. But I underestimated the impact of the U.S. ambassador’s actions, at first not realizing that celebrating Tết — Vietnam’s Lunar New Year celebration — would leave more of an impression on the people of the country than any official public statement or press conference. I gradually came to understand that learning about and observing ancient traditions also impressed Vietnamese-Americans.

After three months on the job, I felt that we had managed to set the stage for three productive years. I had already seen throughout my diplomatic career that the United States casts a long shadow, and I knew that, when Americans show respect, it has a big impact. Showing respect meant figuring out what was truly important to U.S. partners and taking that seriously. Respect cost us very little and gained us almost everything. With that in mind, I focused on areas of collaboration that I believed would matter to the Vietnamese.

By the end of the first 100 days, I also realized that Ngoc’s proposal for a Trọng visit to Washington carried high risk, but also potentially high reward. In retrospect, I see that facilitating Trọng’s Oval Office meeting with Obama was the most consequential accomplishment of my tenure — and it had never crossed my mind when creating my 100-day plan. Perhaps the most important thing I did during those first months was to listen to my counterparts and learn from them what steps would matter most.

Listening carefully and showing respect builds trust by finding where interests converge and doing things together. A diplomat’s job is to find those shared interests and make them the basis for action. All diplomatic reports, contact work and outreach should lead to action.

A real partnership in this case required the United States to listen to Vietnam, and for the Vietnamese to address U.S. concerns. We needed to be honest, direct and respectful with each other about even our most profound differences, especially those related to human rights, such as freedom of speech and freedom to worship and associate. Success in building a long-term partnership would depend on paying close attention not only to what the United States hoped to accomplish, but to Vietnamese hopes and aspirations as well.

Ted Osius is a former U.S. ambassador to Vietnam. During three decades in the Foreign Service, he also served in Indonesia, India, Thailand and the Philippines, among other assignments.

This article is an adapted excerpt from his book “Nothing Is Impossible: America’s Reconciliation with Vietnam,” published by Rutgers University Press.