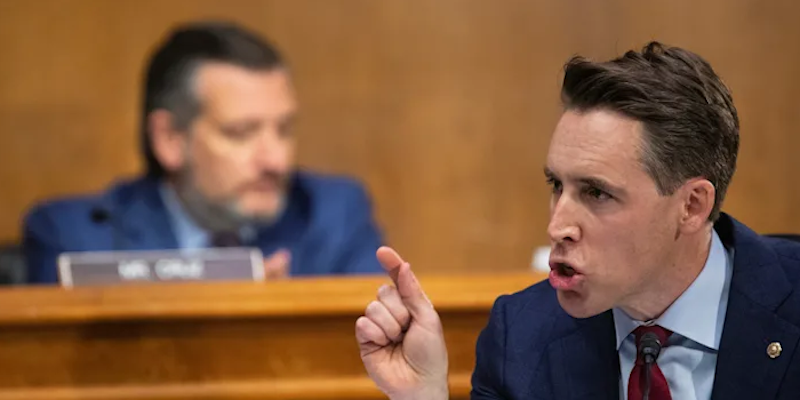 The Awesome Power That Lets One Senator Derail U.S. Diplomacy

Governments around the world are asking what kind of Senate rules allow a single member to block dozens of ambassadorial nominees.

Almost half of American ambassadorships have been vacant for months — a first in the modern world that has stunned both career diplomats and foreign governments. All it took was one U.S. senator’s unprecedented abuse of the confirmation process. Actually, two senators can claim credit in this case, but it only takes one to grind the process to a halt. Officials in countries around the world — and many Americans — are asking what kind of Senate rules grant a single member such awesome power.

It turns out that a Senate practice, rather than a rule, has helped Sen. Ted Cruz, Texas Republican, and Sen. Josh Hawley, Missouri Republican, to ensure that, more than nine months into President Biden’s term, ambassadors to only six countries have been confirmed — another first at the same point in a new administration in recent memory. Government officials and foreign policy experts have expressed alarm that these delays, which have nothing to do with the actual nominations, jeopardize U.S. national security and greatly hinder the country’s ability to conduct effective diplomacy.

For many years, the Senate has confirmed uncontroversial nominees in groups with unanimous consent, which saves valuable floor time compared to a debate and vote on every single nomination. One senator’s objection, however, blocks that shortcut and necessitates the more time-consuming procedure. “A hold can prevent the Senate from moving forward with business through unanimous consent,” said Jordan Tama, associate professor in the School of International Service at American University in Washington, D.C. “If nobody objects, the Senate can act very quickly” with a simple voice vote.

Although a hold doesn’t technically end a nominee’s chances of confirmation, it decreases their odds considerably. “The practical effect of these holds is that the nominations are blocked until the holds are lifted or until the Senate leadership decides to go forward with consideration through normal procedures, which take a lot more time,” Tama said. “Since floor time in the Senate is at a premium, given that there’s a lot of other business that has to be taken care of, it’s not easy for the Senate to dedicate the amount of time needed to take up a lot of nominations through its regular procedures.”

Holds on some nominations are not unusual when senators voice concerns about a particular nominee’s past or opinions on issues key to the position to which they are nominated. But Cruz’s and Hawley’s holds have been unusually broad. Cruz has blocked all State Department nominees to show displeasure with the Biden administration for waiving congressional sanctions on German companies involved in Nord Stream 2, a Russian natural gas pipeline. “My holds are in place to pressure the administration to follow the law,” Cruz said last month. Administration officials said the presidential waiver is entirely legal. Hawley vowed to block all national security nominees in various departments until Secretary of State Antony Blinken and Defense Secretary Lloyd Austin resign because of the chaotic withdrawal from Afghanistan in August.

Cruz’s “behavior is clearly worse than what we’ve seen in the past,” Tama said. “What’s different here is that Cruz and Hawley are attempting to hold up nominees for a wide array of positions based on a particular objection that they are presenting, even though the issue that they are raising concern about may have nothing to do with the responsibilities that official would have [when in office]. One could imagine a scenario where one might place a hold on an official who is directly involved in that policy area,” but placing a hold on officials throughout the whole government is unprecedented. “We haven’t had that experience in the past,” Tama added.

Democratic members of the Senate Foreign Relations Committee have been unusually critical, particularly of Cruz’s tactics. “This risks being hyperbolic, but it’s like negotiating with a terrorist,” said Sen. Chris Murphy of Connecticut. The committee chairman, Sen. Robert Menendez of New Jersey, said that Cruz has “abused the process that this committee has in a way that, in my entire life in the Senate, I have never seen on either side of the aisle.”

However, a spokesperson for Sen. James Risch, Idaho Republican and the committee’s ranking member, reportedly blamed the State Department’s and White House’s legislative affairs operations for not working more directly with Congress to grease the wheels of confirmations. But as long as Cruz and Hawley maintain their tough line, there are few good options for how to break the stalemate. “One possibility would be to make some policy accomodation to Cruz, but a downside of that approach would be, in a sense, rewarding him for adopting a tactic that is really harmful for the functioning of our government,” Tama said.

A more likely option is for Senate Majority Leader Chuck Schumer, New York Democrat, to keep the Senate in session for longer — during weekends or late nights — to move the nominations through if the holds stay. It’s far from certain, however, that there will be time to consider all nominees anytime soon, given the Senate’s already heavy agenda.

While the process of confirming ambassadors takes a long time to begin with, the Biden administration has been criticized for taking longer than usual to even nominate many appointees, including to key countries like Brazil, Saudi Arabia and Italy. It is also notable that Cruz and Hawley have allowed a few nominees to be confirmed, all of whom are political appointees, including former senators or spouses of former senators, such as Jeff Flake, Tom Udall and Cindy McCain, the new ambassadors to Turkey, New Zealand and the United Nations Agencies for Food and Agriculture in Rome, respectively.

Career diplomats, some of whom have been awaiting Senate confirmation for more than 200 days, have expressed dismay that, at a time when U.S. ambassadors are crucially needed, only those with personal connections to the Senate have been able to escape the brutal politics. “Our national interests and national security are being gravely damaged by the lack of confirmed ambassadors and senior officials in Washington at a time of growing global instability and increasing challenges to our country,” said Eric Rubin, president of the American Foreign Service Association and a former ambassador to Bulgaria. “No other country has ever had nearly half of its ambassadorships vacant.”

“The rest of the world neither understands nor appreciates what can only be seen as a sign of disrespect and lack of commitment,” Rubin said. “We call on the Senate to consider all pending nominations promptly, and on the administration to quickly nominate candidates for the dozens of national security positions that remain without nominees. As we approach the one-year anniversary of Inauguration Day, it is long past time for our country to field a full team.”