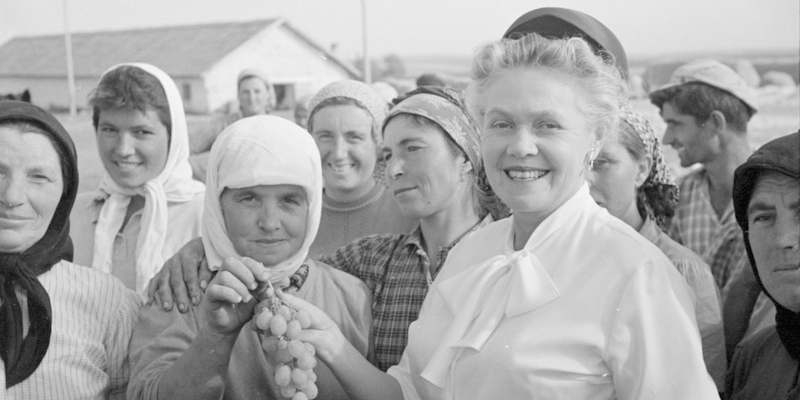 They negotiated peace, strengthened diplomatic relations, survived dangers and opened doors for the exchange of cultures and ideas.

When did the U.S. government accept its first female diplomatic officer? When did it appoint the first female ambassador? Who were those women? Few Americans know the answers to these questions, and the National Museum of American Diplomacy hopes to change that. Although its doors are still closed because of Covid-19, it has unveiled a virtual exhibit called “Her Diplomacy,” which celebrates “women who have blazed trails, negotiated peace, served alongside their partners, strengthened diplomatic relations, survived dangers and opened doors for the sharing of cultures and ideas.”

Lucile Atcherson was the first female U.S. diplomatic officer. Her appointment came soon after the 19th Amendment to the Constitution, which gave women the right to vote, was ratified in 1922. After Atcherson took the State Department examination, the Women’s Association of Commerce in Columbus, Ohio, sent a letter to President Warren Harding, urging him “to see that” Atcherson is accepted. She didn’t need his intervention, having received the third-highest score, close behind two men, according to the museum.

The exhibit was inspired in part by the 100th anniversary of the 19th amendment, said Alison Mann, a historian at the museum. Selecting the women to feature “was a tough call,” she said. “There are hundreds to choose from. Our guiding principle of the exhibit was based on four subjects, listed on banners in front of all the pods [at the museum]: security, prosperity, democracy, development. These panels are only 50 words each, so you have to tell the story as well as possible through images, captions and then some text.”

The virtual project will give the public a taste of what’s to come “in the permanent exhibit,” Mann added. “We worked with the Smithsonian Institution and provided the content, then they did the design and fabrication for us.” The exhibit is part of the broader “Diplomacy Is Our Mission” effort, which aims to tell “the often surprising story of how diplomacy has shaped our nation,” she said.

Among those featured in “Her Diplomacy” is also Eugenie Anderson, the first female U.S. ambassador, who served in Denmark from 1949 to 1953 and was U.S. minister to Bulgaria from 1962 to 1964. Her position in Bulgaria didn’t carry the rank of ambassador, because she headed a legation, rather than an embassy — a result of complicated diplomatic ties with the communist host-government. She “faced constant surveillance, censorship and harassment” from the authorities, according to the exhibit. On one occasion, “she confronted officials after she learned that police were seizing pamphlets” distributed by the legation at an international trade fair. “The pamphlet depicted in photos and text the abundance of American life, showing well-stocked grocery stores, modern cities and suburban single-family homes. The authorities backed down.”

Anderson “was a pioneering practitioner of people-to-people diplomacy, which she called ‘people’s diplomacy,’ engaging with the public to promote trade and strengthen economic ties,” the exhibit says.

The exhibit also tells the story of Kate Koob, one of the hostages in Iran in 1979. “Two weeks after the embassy fell, the students released a group of women and African-American employees,” it says. “Koob and the other female officer, Ann Swift, remained as the only two female hostages. The women were separated from each other for four months, held alone in separate rooms of the embassy. Their only direct human contact was with their male and female Iranian student guards. Koob was determined to stay mentally and physically strong. She set up a regular contemplative routine to get her through each day that included purposeful prayer and meditation. She was given a hymnal from the library in the ambassador’s residence and then later a Bible, enabling her to include daily readings and singing in her routine. Koob also created a calisthenics routine she could perform in small confines.”

Eileen Malloy was among few female diplomats working on arms control in the late 1980s. “As chief of the arms control unit at the U.S. Embassy in Moscow, she travelled to Kazakhstan in 1990 to observe the destruction of some of the last intermediate-range nuclear missiles that were covered by the Intermediate-Range Nuclear Forces Treaty (INF) of 1987,” the exhibit says.

More recently, Erica Keen Thomas arrived in Beijing as the embassy’s counselor for the environment, science, technology and health in 2010. She took over the embassy’s air monitoring project and “quickly recognized its potential for expanded reach, greater global impact and increased public awareness,” the exhibit says. “For her efforts to collect and publicly share data revealing dangerous air pollution levels in Chinese cities, increasing public awareness of the health risks of pollution, and influencing the Chinese government to confront the issue,” she was honored by the Partnership for Public Service as a 2013 Finalist for a Service to America Award.

“It was a way to show the government in Beijing that this information is available for people to see, and so it made them think about their own way of how they report on pollution in China’s biggest cities,” Mann said.

The museum also has a dedicated exhibit about the three women who have so far served as secretary of state — Madeleine Albright, Condoleezza Rice and Hillary Clinton.

“We would like our visitors to understand how diplomacy makes the world go around, and that almost every human transaction is diplomatic,” Mann said.