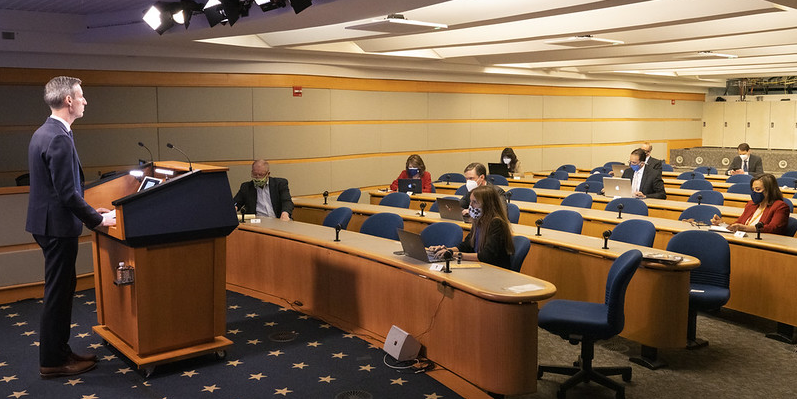 A renewed focus on policy and clearer lines of communication have made covering the State Department more effective, they say.

The first piece of good news for diplomatic correspondents in Washington under the Biden administration was that the State Department’s daily press briefing was back. Since then, a renewed focus on policy, rather than politics, clearer lines of communication, better access to officials and more coherent messaging have made covering the department more effective, compared to the experience during the Trump administration, news reporters say. It’s a “return to normal,” they say, after four years of “chaos,” politicization and antagonizing the media.

“Traditionally, we were used to very stable structures at the State Department in terms of how policy was decided and communicated, and that became very different” under Trump, said Shaun Tandon, who has covered the department for Agence France-Presse for more than a decade. “It’s definitely been quite a change since Biden came in. The most visible part of that is the return of the daily press briefing. There was a point in the Trump administration when the only on-the-record conversation in a given week might be the secretary taking questions. The stakes don’t have to be high every time someone briefs you on record. There should be a routine opportunity to discuss what’s in the news.”

Laura Kelly, a foreign policy and cybersecurity reporter for The Hill newspaper, said that the renewed “daily briefings are really helpful, because, as things change day to day, you can always go back and get the most recent statement” on a given topic. “While they’ve gone back into the press room, they’ve kept at least one telephone briefing a week, and they’ve allowed reporters that are not part of the State Department press pool the opportunity to ask questions,” Kelly said. “This is really helpful, because I’m not a part of the pool, and this allows me to get more access and ask questions on the record as well.”

Even after only six months into the Biden administration, and even with more briefings and better access to various officials, they are “very disciplined and consistent in their messaging,” Kelly noted. That has led to “a change in the nature” of the stories “that have risen to the forefront,” with a “focus back on reporting on foreign policy for policy’s sake,” she added.

The State Department press corps has long been known for caring little about domestic politics. Tandon said that he and his colleagues “made an effort” to avoid the dramatic confrontations the White House press corps had with the Trump administration, and “we avoided worst-case scenarios.” However, both Tandon and Kelly said that Trump’s two secretaries of state, Rex Tillerson and Mike Pompeo, ended up bringing politics both into their work and their relationship with the media.

“There was an emphasis in the previous administration on getting out the message to media outlets perceived as politically friendly,” Tandon said. On his first trip to Asia in 2017, Tillerson took only one right-wing reporter and left the State Department corps behind, breaking with decades of tradition. The hostility continued under Pompeo, whose briefings were “sometimes full of drama, because he would spar with reporters,” Kelly said. Both Kelly and Tandon noted Pompeo’s future political ambitions. As for Antony Blinken, Biden’s secretary of state, “I don’t know what his ambitions may be, but you can tell that he wants to get his message out, and there is less of a focus on politics and journalists that are friendly to their side,” Tandon said.

“During the Trump administration, there was so much happening in terms of the drama and the unorthodoxy,” Kelly said. This was on full display during Trump’s first impeachment in 2020. “We had not only the president looking to fire the ambassador to Ukraine, but we were looking to cover Pompeo’s role in that. There was so much focus on how the administration acted that it sucked all of the oxygen out of writing foreign policy stories in general.”

Diplomatic correspondents in the United States primarily “explain foreign policy to a general audience,” said Barbara Slavin, a former senior diplomatic reporter for USA Today. These journalists provide context for policy decisions and explain their implications to the public. “Most Americans never get to travel” to countries and regions involved in foreign policy decisions, and don’t see these policies’ “implications, not just for Americans, but also the people who are living in these countries,” Slavin said. “Any reporter wants to break news, so if you are able to reveal some aspect of foreign policy that is not commonly known, that is certainly a goal, but the explanatory function is key.”

Reporters in the State Department press corps often have a “front seat to history,” said Slavin, who covered the department under Secretaries of State Madeleine Albright, Colin Powell and Condoleezza Rice. The trips she took with them included Albright’s 2000 visit to North Korea and her first meeting with Russian President Vladimir Putin, as well as Powell’s 2004 trip to Darfur while ethnic cleansing was being committed there. “You are there with someone who cuts through all the red tape. There is often no filter between you and the news events,” Slavin said. “I was lucky in that I dealt with a very professional bunch of people, who understood that you had to have some level of a relationship with the press if you were going to get popular support for United States foreign policy.”

During the Trump administration, “reporters had to deal with a lot more abuse of all kinds and a more contemptuous attitude toward the press” by officials, Slavin said. Among those officials was “Pompeo, who openly showed his scorn for members of the press and felt that they were not supportive of the administration and their policies,” she added.

In spite of the challenges, Tandon said that reporters and the State Department’s career officials found ways to navigate the chaos. “There was obviously palpable tension between Trump and the White House press corps, and there was an idea on all of our parts that we didn’t want that model at State,” he said. “There is still the idea that reporters at State — not to discount the hard work of our colleagues at the White House — want to go in depth on the substance of issues around the world, regardless of which party is in power.”

Kelly said that most officials she interacts with are public servants, rather than political appointees, and those interactions are professional, and even warm and familiar. “I sometimes get email responses from people I’ve corresponded with before, and this makes it a comfortable working relationship,” she said. “I find that, during the Trump administration, and so far during the Biden administration, nearly all of my requests are acknowledged and usually answered.”

As for the political leadership, the Biden team “is much more comfortable with the press and wants to make a point that there is a role for a free press, Tandon said. “They wanted to make the distinction right away that they weren’t Trump and would go back to a normal press operation. How do you cover day-to-day diplomacy when the structures that communicate it are shaken up and different?”