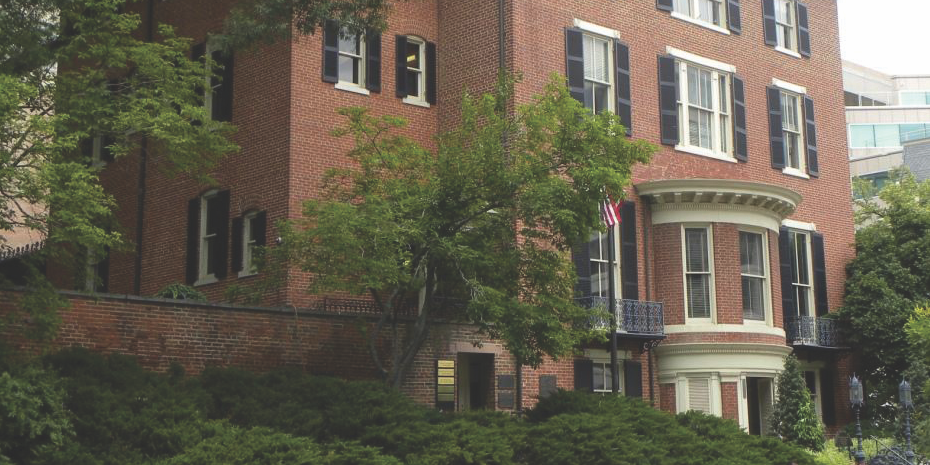 The DACOR Bacon House, located between the White House and the State Department, is on the National Register of Historic Places.

There is a place in Washington with a centuries-old connection to diplomacy, but it doesn’t belong to the government. Strategically located between the White House and the State Department, it was built in 1825 as a private home. Almost 200 years later, with a colorful history of hosting envoys and family members of monarchs and presidents, the house at 1801 F Street in the capital’s northwest provides a tranquil space for frequent meetings of foreign affairs professionals and contemplation of diplomacy’s role and future.

Known today as the DACOR Bacon House, the name most often associated with it is that of Virginia Bacon, whose husband Robert bought it a century into its life. A congressman from New York, whose father and namesake served as U.S. secretary of state and ambassador to France, Robert was considered rather influential in Washington power circles. But his wife’s influence far surpassed his, especially after she inherited the house upon his death in 1938. “Mrs. Bacon was known for the knack of bringing the right guests together at the politically propitious moment, a skill that earned her recognition as a significant catalyst in Washington’s public life,” said her obituary in the Washington Post in 1980.

Five years before her death, she established the Bacon House Foundation to preserve the building as a place for both official and informal diplomacy, and a center for events and meetings on international affairs. While throughout her life she was best known as a hostess of dignitaries, she played diplomatic roles herself, including as a U.S. representative to the coronation of one of Nepal’s kings and the Silver Jubilee of the coronation of an Ethiopian emperor. She also supported various State Department programs, hosting receptions for their participants, to which she also invited foreign diplomats.

“She liked to entertain and would do so for my program,” the late Lucius Battle, a Foreign Service officer, recalled in a 1991 oral history interview with the Association for Diplomatic Studies and Training. “That included foreign leaders and she would give each of them a party. Since we didn’t have much entertainment money, she was very helpful.” He said that Bacon tried to fire him when he ended a State Department contract with a theater academy, on whose board she sat. She invited him to discuss the matter and ultimately agreed with his decision. She also helped him restart his program with another grantee.

In 1986, Bacon’s organization joined forces with Diplomats and Consular Officers Retired (DACOR), to become the DACOR Bacon Foundation. At the inaugural event, then-Secretary of State George Shultz said, “We want to protect and advance the interests and ideals of America. DACOR’s members, whose experience and knowledge of diplomacy are without equal, are vital assets to American foreign policy.” Founded in 1952, DACOR eventually opened its membership to active-duty diplomats and other foreign affairs professionals not employed by the State Department.

Among the discreet talks hosted at the elegant mansion in recent years was one between the ambassadors of Armenia and Azerbaijan, which have been fighting over the territory of Nagorno-Karabakh for decades. The house’s history is rich with meetings between diplomats and other officials from different countries. They started soon after construction was completed under its original owner, Tench Ringgold, a businessman and U.S. Marshal for Washington, D.C. According to scholar Terry Walz, the Ringgolds lavishly entertained the capital’s elite, including former President James Monroe. In 1875, then-owner Sallie Carroll rented the house to the Russian Imperial Legation, whose head, Baron Nikolai Shishkine, hosted various events. Two years later, Grand Duke Alexei, Tsar Alexander II’s son, paid a visit.

The house was placed on the National Register of Historic Places in 1973. Walz, who is working on a history of the mansion, has been exploring the possibility that “enslaved individuals may have constructed and maintained the Ringgolds’ home.” “Like many other early federal-style houses built in Washington, enslaved laborers would have prepared the foundations, made and laid the bricks, assisted with or carried out the needed carpentry and helped complete the interior,” Walz wrote last year for a White House Historical Association project.

Today, DACOR Bacon hosts as many as several events a week, either in its ornate rooms or its large garden. After more than a year of online events because of the Covid-19 pandemic, in-person programming is returning, including weekly evening “cocktails on the patio.” Recent events have focused on Syria, Myanmar and Eastern Europe. In addition, the foundation awards $250,000 annually in scholarships and fellowships to students pursuing careers in diplomacy, development or international relations.

“Our members are united in their belief that diplomatic relationships based on deep political, economic and cultural understanding can solve international problems and change the course of history,” the organization says on its website.

Patricia Norland, a DACOR member, is a former Foreign Service officer and the author of “The Saigon Sisters: Privileged Women in the Resistance.”