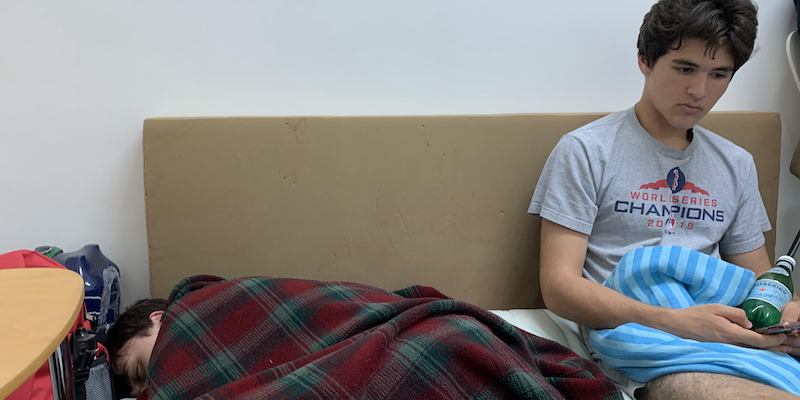 The two teenage sons of U.S. diplomats recall the recent 11-day conflict between Israel and Hamas.

What do you think about when you hear the word “war”? Perhaps despair, loss, anguish, victory, rage? Would “annoyance” come to mind? What about “inconvenience”? Probably not immediately. They did in our case, as we sat in a bomb shelter during the recent 11-day conflict between Israel and Hamas.

Both our parents are U.S. diplomats serving in Israel, and we live on the outskirts of Tel Aviv. We moved here almost three years ago, following a tour in Jordan. We are Bulgarian-American, not Israeli or Palestinian. We’ve spoken with many people with polar-opposite perspectives and seen a lot of hatred on both sides. But we’ve never experienced anything like the recent war.

Here are our individual perspectives.

The first strike came in the evening, but Hamas fired only toward Jerusalem, so that night wasn’t too eventful for us. I was in our house’s bomb shelter for a bit, moderately annoyed as I had an Advanced Placement (AP) seminar exam the next day. The exam went well, and then I gave a girl I liked a birthday gift — special colored pencils she could use for her art. I left school early to prepare for an AP English test the following day.

For a normal kid, high school brings enough stress. But the life of a Foreign Service child is a bit more complicated. There was more bombing the second evening, and we spent more time in the shelter. I could tell you that I was fearing for my life, but that wouldn’t be true. I knew about a defense system called Iron Dome, which can intercept rockets with pinpoint precision. So, armed with this knowledge, I sat there impatiently. But I also felt bad for the Palestinians, who had no Iron Dome, and the bombing they were receiving in retaliation was much more dangerous and damaging. This whole dual-perspective thing can be ironic at times — I was feeling terrible for the people of Gaza, while the rockets I was trying to avoid were coming from that same direction.

The Iron Dome wasn’t 100 percent effective, and parts of the missile barrage on Tel Aviv did fall, raising some alarm with my parents. At first, it bothered me as well, but then I realized that things only hit the fan when the sirens started blasting. We would periodically hear rockets exploding, which — even without sirens — would send my parents into a frenzy, and we’d run back to the shelter. But after a few days, I began to feel complacent. I was worried about my English exam, which had been postponed. The first day they kept us back from school, I had been planning to ask the girl with the pencils to be my girlfriend. Such are the worries of an adolescent male stuck in the middle of an armed conflict.

This conflict has caused so much suffering and pain that I couldn’t even begin to understand it. It started decades before my time. I’m in no way trivializing its severity. That said, when you are actually living in it, there are aspects of the conflict you don’t hear about, looking in from the outside. So someone hearing the story of me hiding in the bomb shelter might be shocked that I could live through something so traumatizing at a young age. But I was sleeping like a rock when rockets woke us up in the middle of the night. We made the shelter a little nicer, with blankets, cushions and a pile of my parents’ New Yorker magazines. I couldn’t go out and see my friends, or finish exam week — that was the extent of the hardship I suffered.

The word “war” may have a different meaning for different people. Because I was privileged to be protected by the Iron Dome, I experienced just a bit of annoyance. I was more concerned with my own life than the context of all the pain around me — that is the foolishness of man.

Rockets are no longer flying, and I can report that I have since passed my English exam. Oh, and I have a girlfriend now.

I went to elementary school in Arlington, Va. Every winter, I hoped to see the whole town steeped in white sheets at least for a few days. We usually did get such days, when even the most draconian teachers would admit that we students deserved to stay home.

When you go to high school in the Mediterranean climate of Israel, days off due to weather are much rarer. There is something special about unexpected holidays — and dreaming at night that one of those might be awaiting me in the morning.

These thoughts were brewing in my mind while I was staring at the slightly buffering, digitally rendered face of my English teacher on a bright Thursday morning in May. Our classes were back on Zoom. There may be a ceasefire soon, a school email had said the day before, but Hamas would continue firing rockets for days. Like a guitarist with calluses on his fingers, I felt a kind of callus in my eyes. I zoomed in on “Hamas firing rockets” as quickly as I would spot the words “snow day” in a long message.

There is a plot trick used in movies, where something playing on a TV screen in the background ends up having a critical role in the story later on. A news anchor would be talking about a mysterious new wave of cannibalism as the main character leaves the room, and half an hour later, the main character is fighting off zombies with a double-barreled shotgun. Similarly, hearing about growing tensions in Jerusalem and deteriorating conditions in Gaza felt like background detail not worth paying attention to — until rockets were fired. My immediate reaction to the launch, I’m slightly ashamed to say, was the most predictable one from a jaded teenager such as myself: I began an annoyed walk toward our basement, where our bomb shelter is located, ready to get it over with as soon as possible. That was one thing I never realized about world-changing events until I lived through two of them in two years: just how annoying they can be.

I recently read an excerpt from the diary of a woman who lived through World War II. One of her entries was along the lines of, “Mother made those delicious jam tarts again. Mussolini is no longer in power.” The mundane comes first; the significant is an afterthought. I felt much the same way. Before I ran to the shelter, I grabbed my assigned book for English class, “Purple Hibiscus” by Chimamanda Ngozi Adichie. If I’m going to be trapped underground while missiles are flying overhead, I figured, I might as well get my homework done.

It’s easy to think of sleeping as a time-skip — we close our eyes at night, and seemingly instantly, we open them again to the morning sun. Things happen when we are asleep, of course, but we are never quite as aware of that as when our sleep is interrupted by missiles from Gaza. Suddenly, you realize that sleeping through the night will be a struggle. Waking up repeatedly and staying up for half an hour at a time in an airtight underground room is bad enough. But the most surreal, annoying and weirdly reassuring part was that this happened on school nights. We were expected to wake up at 8:30 the following morning and join our silly little Zoom class to learn how to use the law of cosines — or whatever.

There was some instinct in me to reject that. A part of me, still intact from elementary school, wondered what I was doing in the Middle East — and why, despite all the cowering in shelters and friends’ wishes for safety on social media, there was any semblance of school at all. Not that the presence of school was a bad thing — even that attempt at normalcy helped keep me sane during the 11 days of rocket threats.

Back in Virginia, a snow day meant forgetting the nuisance of school and playing outside. Here in Israel, a rocket day means clinging onto school as tightly as I can, and forgetting what’s going on outside.