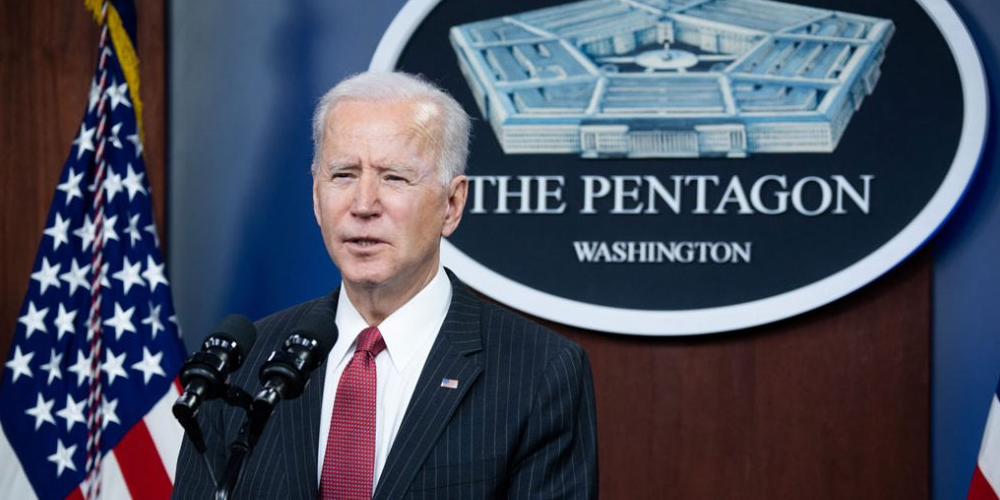 Why Defense Gets 12 Times More Money Than Diplomacy

Comparing the two budgets is as meaningless as comparing apples to onions. Let’s tend the whole orchard for a change.

Reflecting a historical pattern, almost half of the Biden administration’s recently proposed 2022 U.S. federal budget would be spent on defense, pending the approval of Congress. Judging by another historical trend, lawmakers are more likely to increase the requested amount than to lower it. At the same time, the White House’s proposal would make the international affairs budget bigger than ever. Even so, it would still be 12 times smaller than the funds for defense. As tempting as it may be to compare the two budgets, however, doing so is as meaningless as comparing apples to onions.

Let’s first get the numbers out of the way. In its so-called base discretionary request, the new administration has asked for $753 billion for defense, most of which would go to the Pentagon, and $63.5 billion for international affairs, with the bulk destined for the State Department. The latter is smaller than the proposed budgets of several other government agencies, including the Departments of Veterans Affairs, Health and Human Services, as well as Education — the intelligence budget is not published, but it’s definitely on that list, too.

The minor similarity between apples and onions stops at the roughly round shape of both. Defense and diplomacy, together with intelligence, are part of the national security bureaucracy and represent the projection of U.S. power — and this is where the major differences begin, with the distinction between hard and soft power. The mission of both is to protect the United States and advance its interests. But the ways in which they do so are very different, as are their sizes.

The defense budget has increased by about $100 billion in the past decade, and while part of the reason has to do with inflation and higher acquisition costs, some of it has been political, especially in election years, when politicians seem to vie for bragging rights on how strong their support for national defense is. The same cannot be said of the international affairs budget, which some of these same politicians take pride in deriding.

Before spending 30 years in the Foreign Service, I had a two-decade military career. Based on my experience, I believe the defense budget could be trimmed or at least increased at a much slower rate without endangering national defense. But such an argument is certain to fall flat in both Congress and the administration, because of the Pentagon’s strong domestic constituency. Even if a miracle were to stem the rise in defense spending, however, it would always dwarf the international affairs budget and retain the lion’s share of the overall budget.

There are logical reasons why this is so. National defense is a large undertaking. The U.S. defense establishment — the Department of Defense and the military services — is a huge organization. The uniformed military, consisting of the Army, Navy, Air Force, Marine Corps, Space Force, as well as the Coast Guard, which is part of the Department of Homeland Security but in time of war or other emergencies can operate under the Department of Defense, totals 1.4 million active-duty personnel. In addition, there are more than 800,000 civilian employees, 600,000 contractors and 1.5 million family members of the uniformed members who must also be supported. These numbers alone reveal a drastic contrast with the State Department and the U.S. Agency for International Development, the two main international affairs agencies, which have a combined total of fewer than 80,000 full-time employees, and a combined total of contractors and supported family members that is only slightly higher.

It’s in the respective missions of diplomacy and defense, though, that the real reasons for the budgetary differences emerge. In addition to supporting the primary mission of a military organization, which, simply put, is to prepare to fight and win the nation’s wars, the Pentagon and its subordinate agencies must provide support to the family members of its uniformed personnel at bases throughout the United States and in many foreign countries, including housing, health care and education. While civilian government agencies don’t offer housing and education to employees’ families stationed in the United States, the Department of Defense does. Both domestic military installations and those abroad have housing, healthcare facilities, post exchanges, commissaries and schools. Currently, the military’s healthcare budget is just slightly lower than all of U.S. foreign assistance.

Making war is a very expensive undertaking. Much of the equipment and supplies are for one use only. The unit cost of a Hellfire II missile, for example, exceeds $71,000, and only in 2015, the Pentagon commissioned more than 2,100 of them. Given training requirements, as well as tactical operations in places such as Afghanistan and against terrorist targets since then, it’s unlikely that many of these remain in the inventory. The same is true of all other ammunition, from bullets for assault rifles to shells for artillery and tanks. Some of these supplies will be used for “live-fire” training, and the rest will be expended in combat operations. Training and equipping a military force for deployment in various climates and terrains or to face a wide range of potential adversaries are costly. So, in fact, is deploying the military to conduct operations.

The U.S. government spends an estimated $200,000 a year to maintain a Foreign Service member abroad. At the end of 2020, there were about 9,000 such members. In contrast, the military spends about $250 billion to maintain troops, fleets, equipment and bases overseas. Even with the increased cost of building new embassies, caused by heightened security requirements, the price of maintaining our diplomatic presence doesn’t begin to approach what the military spends.

So the Department of Defense is the big dog in the kennel when it comes to budgeting, but does it really matter? Wouldn’t it be more productive to ensure that all agencies responsible for national security are adequately funded, so they can carry out their missions effectively? Rather than comparing the budget for diplomacy and defense, more emphasis should be placed on discouraging the practice of using the State Department budget as a convenient political football, or looking at the defense budget as sacrosanct. Both agencies are essential to our long-term security and should be treated accordingly.

Military operations will always be more expensive than diplomatic activities — that’s just the nature of the beast. Even if the defense budget were cut by half and the diplomacy funds were doubled, the former would still be larger by a wide margin. Let apples be apples and onions be onions, and tend the whole orchard for a change.