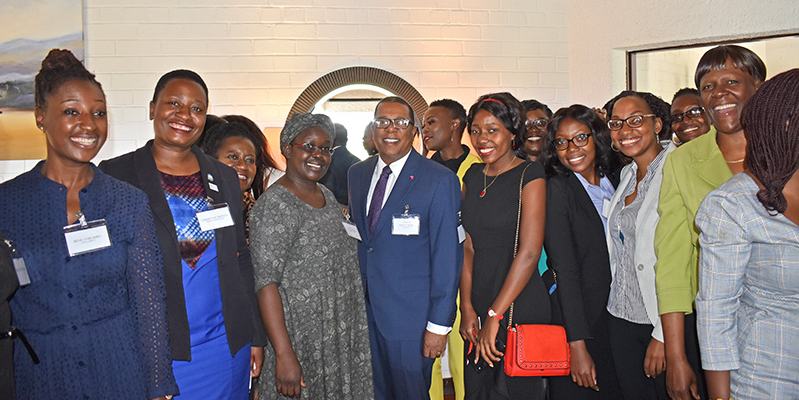 A two-time ambassador, Brian Nichols belongs to a tiny minority of Foreign Service officers to make it to the State Department’s top echelon.

Brian Nichols was a 24-year-old newcomer to the U.S. Foreign Service in the fall of 1989, when he arrived in Peru for his first overseas posting. Over the next few years, terrorist attacks, including on U.S. diplomatic facilities, were frequent occurrences in the South American country. It was peaceful and much changed when he returned as ambassador in 2014, but he says his house was still the most attacked ambassador’s residence in the world.

The terrorism threats and other security challenges that marked Nichols’ first tour provided a preview of what was to come in an increasingly dangerous diplomatic career that spans more than three decades. Last week, the White House announced President Biden’s intention to nominate Nichols, currently the ambassador to Zimbabwe, as assistant secretary of state for Western Hemisphere affairs. The nomination requires Senate confirmation.

After his first tour in Peru, Nichols served in El Salvador at the end of the Central American country’s civil war. During his assignment as political counselor in Indonesia, which began weeks before the 9/11 attacks, extremists linked to al Qaeda killed 202 people, including seven Americans and 88 Australians, at a nightclub in Bali. Less than a year later, a suicide bomber murdered a dozen people at the JW Marriott hotel in Jakarta.

In an interview for my book “Diplomats in the Trenches,” Nichols said he and his colleagues at the embassy warned the Indonesian government about potential terrorist activities in the country with the world’s largest Muslim population soon after 9/11. However, “we didn’t get much of a response,” he recalled. “There was a lot of resistance, because most Indonesians were dismissive that al Qaeda-led terrorism existed in their country. The overwhelming sentiment was that Indonesian Islam is tolerant, which was certainly true, but there was some extremism ― there were groups willing to use violence to achieve their goals.”

The main such group was Jemaah Islamiyah, which was responsible for the Bali bombing. After that massacre, the Indonesian government “finally understood the gravity of the problem and could no longer ignore our requests” to start building counter-terrorism capabilities, Nichols said. “They realized that this type of violent extremism was a threat to religious harmony, and they made a mental shift to deal with the problem from a law-enforcement standpoint.”

The embassy worked to “give them the tools” to investigate and prosecute those responsible for terrorist attacks, and to establish a police anti-terrorism unit, Nichols said. “We also worked with members of religious organizations, the media, universities and others to get popular support for dealing with the threat of extremism and terror,” he added. “Australia was a major partner in this effort, as were other Western governments.”

Good diplomats understand cultural specificities and sensitivities in the countries where they serve, and Nichols learned something new about Indonesians during a police press conference to announce the capture of the perpetrators of the Bali bombing, who were there in handcuffs. “They were smiling and laughing,” Nichols said. “We wondered why they were so jovial. Our local counterparts told us that’s what Indonesians do when they are guilty. So that left no doubt about the suspects’ guilt in the minds of the public.” Jemaah Islamiyah was significantly weakened at the time, with its leaders and hundreds of followers behind bars. However, reports began appearing in 2015 that the group was active again, fundraising, recruiting, and even sending members to train in Syria.

Nichols continued to deal with terrorism-related issues as deputy chief of mission in Colombia, beginning in 2007, including the added dimension of narcoterrorism. The government’s decades-long armed conflict with the militant movement FARC brought death, destruction and fear into the lives of all Colombians, along with efforts by American diplomats, military and intelligence officers to help end the de facto war.

In 2008, Nichols and his embassy colleagues were involved in a successful attempt to rescue 15 hostages, including three American contractors, who had been kidnapped by FARC rebels more than five years earlier. While that was a Colombian operation, “we were able to provide intelligence and technical support,” Nichols said. “It was incredibly satisfying to see these Americans free after all those years.” In August 2016, then-Colombian President Juan Manuel Santos announced that, after four years of negotiations, his government had reached a peace deal with the FARC. The conflict is estimated to have claimed more than 200,000 lives. 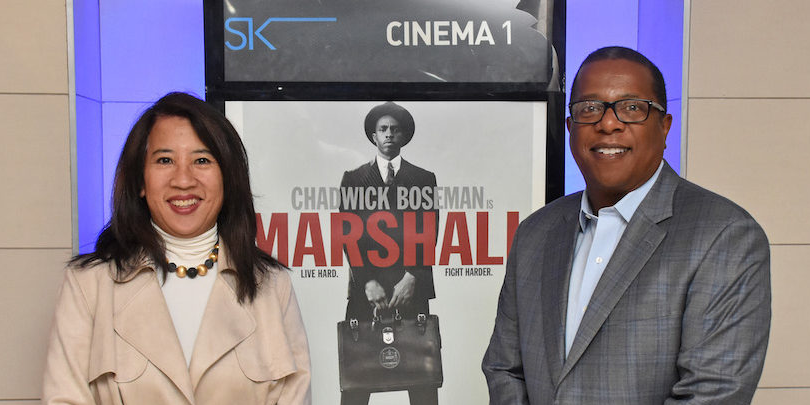 Brian Nichols and his wife, Geraldine Kam, hosted a screening of the film “Marshall” in Harare, Zimbabwe, on March 4, 2020. Photo by U.S. Mission Zimbabwe.

Nichols’ and his wife, Geraldine Kam, also a Foreign Service officer, have two daughters. They were toddlers at the time of the Bali bombing, and their mother left Indonesia with them for over six months as part of an embassy evacuation of dependents. That was the only time when the family was apart. Nichols said they decided when they got married that their “key goal was not to be separated and to raise the children together.” He acknowledged that Kam has made more career sacrifices than he has. She could have been in a senior position at another embassy, but she chose to take unpaid leave and go to Peru as a spouse ― nepotism rules didn’t allow her to work for her ambassador-husband. When it was time to go to Zimbabwe in 2018, she made perhaps the greatest of all sacrifices, taking an early retirement from the Foreign Service.

As a Black and an Asian-American officer, respectively, Nichols and Kam represent small minorities in the Foreign Service ― Black officers are only 7 percent, and Asian-Americans are 6 percent, according to a 2018 Government Accountability Office report. The picture is much bleaker at the assistant secretary and higher levels at the State Department, which require Senate confirmation. Nichols said that, until the early 2000s, the State Department “didn’t recruit for diversity aggressively enough.” In recent years, the department has said that it wants the service to “look more like America,” but “these policies will take time to play out,” he said.

“We are competing with Wall Street, Silicon Valley, academia and other places where talented people go. For couples, both members expect to work and have fulfilling careers, and that’s still a challenge for us. I’d like to see more resources for recruitment, as well as retention and salaries,” Nichols said. “We also need to make sure that we groom and select a more diverse group of career people to serve in deputy chief of mission, ambassador and deputy assistant secretary positions, because they prepare us to be assistant secretaries and undersecretaries.”

This article is an excerpt from his book “Diplomats in the Trenches: Profiles of U.S. Foreign Service Officers.”