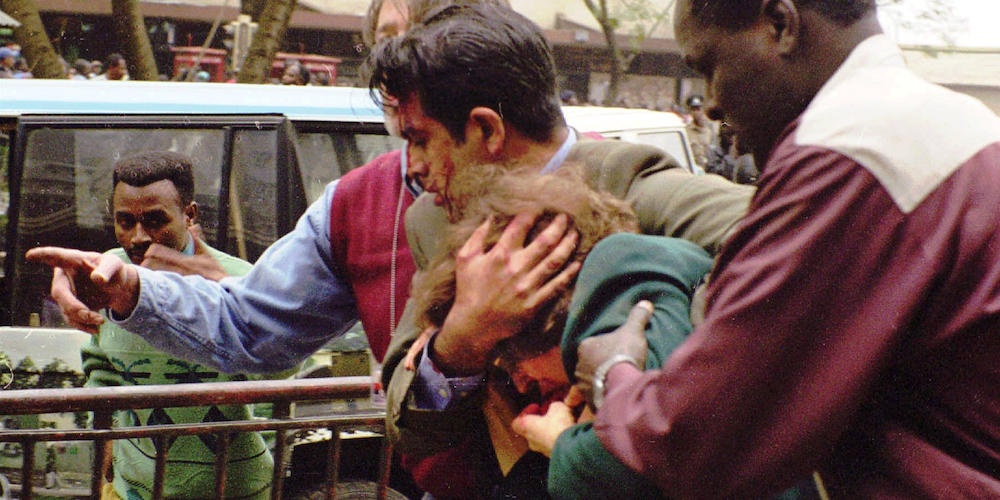 From Benjamin Franklin to the Iran hostage crisis to the Dayton Accords, the collection aims to bring diplomats’ work to life.

Prudence Bushnell was the U.S. ambassador to Kenya when al Qaeda terrorists bombed her embassy in 1998, killing more than 200 people. Blown to the floor by the blast during a meeting in a nearby building, Bushnell, a career Foreign Service officer, was one of thousands wounded in the attack. Blood stains from the head injury she sustained still rest on the green suit she was wearing that day. The suit is among 9,000 artifacts in the National Museum of American Diplomacy.

“I have known about [the museum] since its inception, so it was logical to donate an artifact that speaks to the dangers to people who, without guns, safeguard our nation and citizens,” Bushnell said.

A collection of cards and letters she received in the aftermath of the bombing can also be found in the museum. Other artifacts she donated include items she had from her father, Gerry Bushnell, also a Foreign Service officer: a cookbook, “Operation Vittles,” published in 1949 by U.S. military and Foreign Service wives in Germany during the Berlin blockade, as well as “Welcome to Iran” and “Welcome to Pakistan” U.S. embassy brochures given to newly arrived American diplomats in those countries in the 1960s. The artifacts also show the role of Foreign Service family members. “If Americans know little of diplomacy and diplomats, they know even less about us as family members who also represent our country,” Bushnell said. 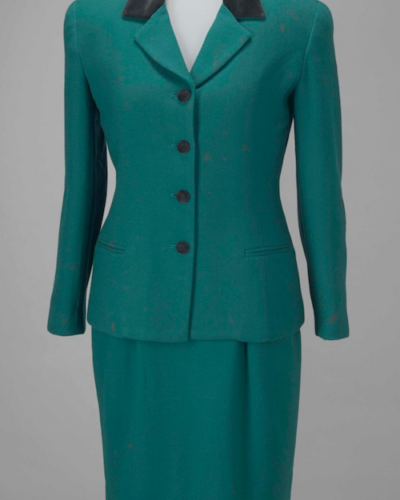 Blood stains still remain on the suit worn by Ambassador Prudence Bushnell when she sustained a head injury during the 1998 bombing of the U.S. Embassy in Kenya. Photo courtesy of the National Museum of American Diplomacy.

Officially scheduled to open in 2022, the diplomacy museum first welcomed visitors in 2017, in a 21,000-foot pavilion marking its first phase. The museum aims to tell the story of American diplomacy by showcasing parts of diplomats’ lives and work in service of the United States around the world. There is a “cookie-pusher” myth about us, said Jane Carpenter-Rock, a Foreign Service officer and the museum’s acting director. Part of the myth is the idea that diplomats “go to parties and hobnob and lead these glamorous lives,” she added. “Diplomacy can be very tough, and it’s not always done in glamourous environments. It’s done in very austere, difficult environments — and it’s not all receptions. It’s very important, difficult work.”

Before the Covid-19 shutdown, the museum held a series of public events and educational programs for students in its pavilion, which was built as an addition to the State Department in Washington. Online exhibits are available during the pandemic, including profiles of women in the Foreign Service, the 1995 Dayton Accords that ended the war in Bosnia, efforts to bring home Americans abroad when the novel coronavirus hit last year and the history of discrimination against LGBTQ diplomats.

Remember the daring escape of six Americans after the embassy in Iran was attacked in 1979, which was dramatized in the 2012 film “Argo”? Those embassy employees, who found refuge in the Canadian ambassador’s residence, used fake documents and disguises, pretending to be a Hollywood film crew. The glasses one of them, Kathleen Stafford, wore as part of her disguise are now in the diplomacy museum’s collection.

“We always felt very fortunate we got out, compared to our friends who were there 444 days,” Stafford, now an artist, said of the embassy staff who were much less lucky than she was. She donated the glasses as a tangible memory from the hostage crisis. Another reason “was to recognize the Canadians’ generosity and courage,” she added. “The Canadians are always there, helping us out. That’s how diplomacy works. Governments work together and talk and find solutions to problems, without having to use weapons.”

Talk of a diplomacy museum swirled for years before then-Secretary of State Madeleine Albright approved a plan to locate the space in the department in 1999. A private Diplomacy Center Foundation was formed, and it took nearly 18 years to raise funds and complete the first phase of construction and artifact collection. The next phase will require an additional $35 million for a 20,000-square-foot exhibition space. Curators continue to accept and catalog items for future exhibits. Some items, such as a 13-foot section of the Berlin Wall, tell their own story; others give context to major events, said Alison Mann, the museum’s historian.

The stories behind the objects show the art, skill and craft of diplomacy, Mann said. A set of diplomat-made Mandarin flash cards from the 1930s demonstrate how — before the State Department offered language training — one Foreign Service officer managed to communicate with locals in China. A diplomatic courier’s bag with travel tags tells the story of how official documents made it to overseas posts before the internet age. A well-used passport chronicles a diplomat’s career, and how changing country names and visa requirements signified geo-political shifts.

“We realized people are quite interested in the bling,” Carpenter-Rock said in reference to gifts to various secretaries of state or other department officials from foreign governments. Department rules prohibit accepting such gifts worth more than $350, but if refusing them would cause offense or diplomatic damage, they must be turned in to the Office of the Chief of Protocol. So there is a significant supply to showcase, from jewelry to artwork to tea sets. Once expanded, the museum will have a “protocol gift vault” that explores the items’ political and cultural importance, Carpenter-Rock said.

Museum employees work for the State Department, which potentially leaves the door open to political influence over how stories are told. However, Mann said she hasn’t felt pressure to frame an exhibit in a particular way. Many civil servants are scholars or museum professionals who research primary sources and stick to facts, she said. “If we felt there was even a tinge of politicization of a certain issue, we would try to stay away from it,” Carpenter-Rock said. “We pretty much develop our own agenda of the types of programs we want to have, the stories we want to tell. We are not dictated to by the building.”

Mann said some exhibits and programs take a familiar story and highlight the diplomatic aspects or ensure the public hears from diplomacy’s diverse voices. Going back to the birth of the nation, the museum showcases Benjamin Franklin’s diplomatic skill and work on a commission in France charged with securing Paris’ support for American independence. That work from 1776 to 1778 is the reason Franklin is considered the first U.S. diplomat. “Diplomacy was right there at the founding of our nation. If it weren’t for diplomacy, we wouldn’t have a nation,” Carpenter-Rock said.

Diplomacy simulations in the museum have inspired a desire among many students to work in diplomacy, Mann said. Discussions they find most intriguing include those about early diplomacy between the U.S. government and Native American tribes, and how slavery factored into foreign policy decisions and international law, she said. These “a-ha moments” that help visitors understand diplomacy better and appreciate diplomats’ work are some of the best rewards of her job, she added. She hopes that audiences “recognize what’s being done around the world by diplomats, how diplomacy affects them, and how it affects our lives here in America.”

Carpenter-Rock agreed. “This country owes a lot to diplomacy” and “its diplomats,” she said. Because diplomacy is done abroad, it’s “out of sight, out of mind” for most Americans. “We want to bring those stories much more into public view, so they can be known and appreciated.”