‘Abused’ by Trump, Diplomats Seek ‘Depoliticizing’ and ‘Care’ From Biden 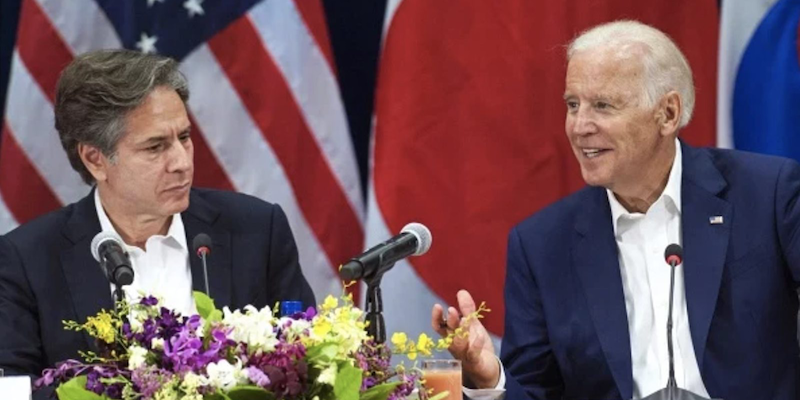 President-elect Joe Biden and his pick for secretary of state, Antony Blinken, on a visit to Asia during the Obama administration (file photo).

Hundreds of America’s career diplomats have amassed thick folders documenting unethical and unlawful orders and actions by their political bosses in the last four years. They have flooded the State Department’s legal advisers with an unusually large number of reports about committed or attempted violations, seeking counsel on how to protect themselves from potential prosecution without being punished by Trump appointees for insubordination.

This wasn’t what I expected to hear when I asked about 100 Foreign Service officers posted around the world what they need from their soon-to-be boss, Secretary of State-designate Antony Blinken, to get ready for the hard work of helping the incoming Biden administration restore U.S. global leadership — after all, diplomats will be indispensable in that effort. Having covered the Foreign Service for years as a journalist and authored a book about it based on hundreds of interviews at 80 diplomatic posts, I would never describe the service’s members as angry. Yet that’s what came through in the responses of most of the dozens who shared their views, feelings, hopes and fears. Many said they “canvassed” additional colleagues and conveyed their views as well.

The “abuses” they have suffered from partisan Trump ambassadors and other appointees prompted the interviewed officers to put “depoliticizing” American diplomacy at the top of their cumulative list of immediate steps Blinken and President-elect Joe Biden should take upon assuming office. The officers reported receiving orders that broke ethics rules, witnessing misappropriation of taxpayer funds and being pressured not to wear masks during the pandemic. Sometimes, they noted, the “politicals” were enabled by a few “super Trump supporters” among the career staff, which made the experience much more painful for the service. “Our people are shattered,” said one officer, who asked not to be named for fear of retribution, as did everyone else interviewed for this article. “Those of us who are willing to stand up and speak out have been pummeled” by political ambassadors who “took the life out of many.”

Such strong and emotional language is highly uncommon coming from Foreign Service officers, who are almost never willing to criticize a sitting administration. As public servants, they feel much more comfortable following political leaders of either party — sometimes to a fault — even if they disagree with them. But they said they have had enough of the Trump administration’s “shenanigans,” of which Secretary of State Mike Pompeo’s spending of tens of thousands of taxpayer dollars on private dinners is just the tip of the most recent iceberg.

Even if no abuses occur in the Biden administration, “we could move more quickly and get more things done more effectively, based on subject-matter expertise, if State was less weighted down by political appointees in our mix,” an officer in Washington said. Long before the Trump administration, a spoils system more typical of a developing country than a leading democracy had entrenched in the State Department more political appointees than in any other national security agency. Colleagues from the defense and intelligence communities are “floored by the high number of mid-level and senior appointees working at State, particularly when they make decisions on highly sensitive topics, in many cases with little substantive knowledge or experience,” the officer said.

Another officer called on Blinken to fill many of the top department positions with career diplomats — there is only one in the current leadership — to “show them that they are as important as the political appointees.” That would have the added benefit of putting such officials in place quickly, because they wouldn’t need to wait for lengthy security clearances.

Next on the list I compiled from the Foreign Service officers’ recommendations for Blinken are variations of “help your people” and “take care of your people.” Not since Colin Powell’s tenure as secretary of state has the service felt truly taken care of, several officers said. In the immediate term, that means “getting us better medical coverage overseas, and especially mental health support,” as service members deal with the impact of Covid-19 on their families, as well as with the added pressure of helping their host-countries survive the crisis, an officer in Africa said. “Show real care,” the officer urged. “That includes going overseas and prioritizing meeting embassy staff and families — not leaving them waiting for four hours in the hot sun, and then not showing up at all… We need groundbreaking leadership.”

The pandemic has created a “gross divide in our service in the past year” that has nothing to do with politics, the officer added. Those who chose to return home from overseas and work remotely feel “shut out, neglected, unheard or unsupported,” while the officers who remain at embassies and consulates are “often resentful of the extra workload” and blame their colleagues for “not doing their fair share,” even from a distance. “This division will have to be healed,” the officer said.

The interviewed diplomats also cautioned Blinken not to rush into rehiring all of their former colleagues who were pushed out by the Trump administration or resigned. Their return is among the recommendations of recent think-tank reports on reforming the State Department. Only the best should come back, several officers said. “We appreciate that those who have been wronged and are pillars of the Foreign Service are being brought back, like Linda Thomas-Greenfield,” Biden’s pick for ambassador to the United Nations, another officer in Africa said. “But those of us still on active duty must also be included in the new leadership team.”

An officer in Europe rejected the “public narrative” that the Foreign Service was “hollowed out” by former colleagues’ departures. “A lot of talent left — no question. Many really good officers remained, however, and have worked hard,” the officer said. An officer in the Middle East worried that hiring back too many might delay already dwindling promotions for those who stayed. “Give us mid-level types a chance to actually get promoted once in a while, so we don’t take our talents elsewhere,” the officer said. Yet another officer urged Blinken to look beyond the small career circle that worked for him when he was deputy secretary of state during the Obama administration as he makes new leadership appointments.

Making the bureaucracy more efficient is a long-term undertaking, but there are immediate steps Blinken can take to make it at least less clumsy, burdensome and stupefying. One is to remove the shackles the Trump administration forced on career ambassadors overseas, preventing them from performing many of their daily duties without prior authorization from Washington. The new secretary must “empower us once again to speak to the local media and exercise American leadership after four years of being muzzled,” one such ambassador said.


Several officers brought up the “absurdity” of the State Department process of “clearing” even the most inconsequential documents. “Rather than drafting something and then spending hours or days shopping it around the department” for approval, often by dozens of offices, create an internal webpage where offices can upload suggestions and edits, another officer in Europe said. In another peculiar practice, working-level officers rarely get readouts of conversations the secretary of state and his top deputies have with foreign leaders. “How ridiculous is it that a desk officer has to ask a foreign interlocutor what his own boss said?,” the officer demanded.

It has been almost 20 years since the State Department’s last significant investment in technology, when Powell put an Internet-capable computer on every officer’s desk. Modernizing the existing infrastructure will also take time, but there are urgent needs Blinken should address immediately. “Even something as simple as every officer should be given a laptop,” the first officer in Africa said. “Did you know that today many officers overseas aren’t even allowed a work phone? But they have to work at all hours of the day, on weekends and in emergencies.” In the long run, “we need to think bigger; we need breathtaking levels of cash investments in our virtual capabilities, hardware and software,” the officer said.

Foreign Service members have no illusions that they will have to “explain the last four years” to the world, as another officer in Washington put it. As a result of the Trump administration’s actions, including the president’s refusal to recognize the results of a free and fair U.S. election, “we no longer have a moral leg up compared to our adversaries. Our message of democracy, human rights and good governance has been undermined,” the officer said. Diplomats will look for guidance from Biden and Blinken on crafting the best arguments about why other countries should still take the American democracy-promotion agenda seriously.

Keeping files documenting questionable or unethical actions by political appointees is no novelty for the Foreign Service. The enormity of those cases during the Trump administration, however, is perhaps unprecedented. Officers reported having compiled inch-deep folders, and many said they plan to turn them over to the State Department’s Office of the Inspector-General, once it’s free from Pompeo’s interference. Pompeo fired the inspector-general earlier this year, and the acting incumbent resigned last week. The officers made clear they know that the arrival of a new administration won’t just flip a switch and magically heal the many ills plaguing the State Department. But they said that “common decency” and “basic moral standards” will go a long way.

“I can’t wait for Pompeo and his ‘swagger’ to disappear from our lives forever,” another officer in the Middle East said.