An Outsider’s Peek Inside the Foreign Service’s Inner Workings

How serving as a public member of employee evaluation and promotion panels turned my view of foreign policy upside down. 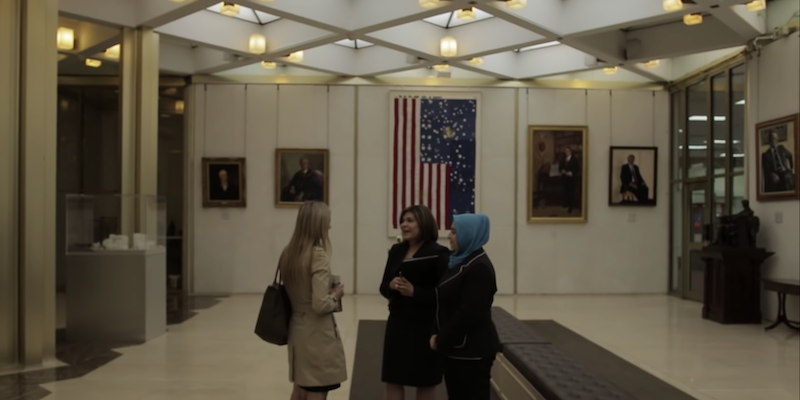 Inside the old historic chancery of the U.S. Embassy in London. The embassy moved to a new building in 2018. Photo by the U.S. Department of State.

I have taught foreign policy as a history professor for years. But I didn’t have my eyes fully opened to everyday diplomacy — or even considered all it takes to run an embassy and manage a relationship with another country — until I served on a panel that evaluates career diplomats’ performance and makes recommendations for promotions.

Like their military colleagues, U.S. Foreign Service officers from the State Department, the U.S. Agency for International Development (USAID) and the Departments of Commerce and Agriculture have personal ranks. They compete for promotion with fellow service members in the same specialty or career track — in the State Department’s case, those tracks include political, economic, management, consular and public diplomacy. Various panels, called promotion boards, meet for several weeks every year. They are assigned different specialties, and board members review the files from the past five years of employees eligible for promotion. Not everyone they recommend be promoted necessarily ends up with a higher rank — the actual numbers depend on each agency’s available slots.

The Foreign Service Act, a 1980 law, requires that the boards be made up of the service members’ peers — except for one public member, who doesn’t work for the federal government, on each panel. I was recommended to the State Department by an academic colleague who had done this type of work before, and I served for the first time in 2012. Since then, I’ve sat on boards at USAID and the Department of Agriculture, for a total of five times across the three agencies.

Not surprisingly, throughout my academic career, my research and teaching have focused on studying foreign policy from the top down. Serving on promotion boards turned that view upside down. It helped me see U.S. foreign policy, and its implementation in particular, from a perspective I had rarely encountered in books, articles and archives — through the eyes of mid-level or entry-level Foreign Service officers. Instead of analyzing the intricacies of summit diplomacy, I read about the exhausting work that advance teams do in preparation for these summits. I learned that officers are expected to spend less time in the office and more time outside the embassy meeting people from the host-country, preferably speaking in the local language.

The novelties didn’t stop here. I had barely given thought to consular work and the difficult decisions consular officers make when determining whom to grant U.S. entry visas. Ensuring that wait times for visa applicants are not unduly long is a constant challenge. I hadn’t heard of an “American corner,” a resource center for information and programs highlighting American culture, history, current events and government — and for good reason. Those spaces are intended for foreigners, not Americans. They are a lynchpin in telling America’s story, explaining and promoting U.S. policies, countering disinformation and offering space for learning and exchange.

Managing an embassy is another aspect I hadn’t fully considered. It’s not an easy job. Embassies and consulates rely heavily on locally employed staff, having to deal with personal problems, tension between employees, poor work habits, insufficient training or a lack of good mentors. An underperforming staff hurts the entire operation. On the flip side, top-performing employees must be supported, encouraged and rewarded, so they don’t take their talents elsewhere.

My service on promotion boards also taught me about the physical infrastructure of U.S. facilities overseas. Who does the maintenance, the additions and the upgrades to embassies and consulates? Why doesn’t the United States build larger and more modern embassies when the current ones are too small and outdated? Who manages embassy facilities? Who keeps computer systems from being hacked or ensures consistent internet access? Without experts in these areas, diplomacy faces significant hurdles.


In addition to the thousands of employee files I read, I learned a lot from my fellow board members, who shared stories from their Foreign Service careers during breaks. I heard about the quirky personalities of certain dignitaries, about working in countries where power outages were a regular occurrence, about government-sponsored intimidation officers regularly face in some places and the chicanery some governments resort to as part of their standard operating procedures, such as breaking into officers’ living quarters or regularly pulling them over on the road to check their papers. The passion of the vast majority of officers about their work came through in both the files I read and the war stories I heard. Diplomacy is not just a profession but a way of life. Far from “the blob” of often-derided foreign-policy elites, the service members I worked with and read about invariably put their country first. With long hours and in sometimes harsh conditions, the Foreign Service is not for slackers.

I was impressed by how seriously the State Department takes the promotion process — much more so than in academia. I’ve taken some of what I learned back with me to the classroom. I can now paint a fuller picture of American diplomacy for my students and give them insights they can’t read about in history books. Those considering a Foreign Service career are especially grateful.

Michael H. Creswell is an associate professor of history at Florida State University and an executive editor at the journal History: Reviews of New Books.