“We don’t recruit people for jobs; we recruit them for careers and a way of life,” Linda Thomas-Greenfield said about prospective diplomats. 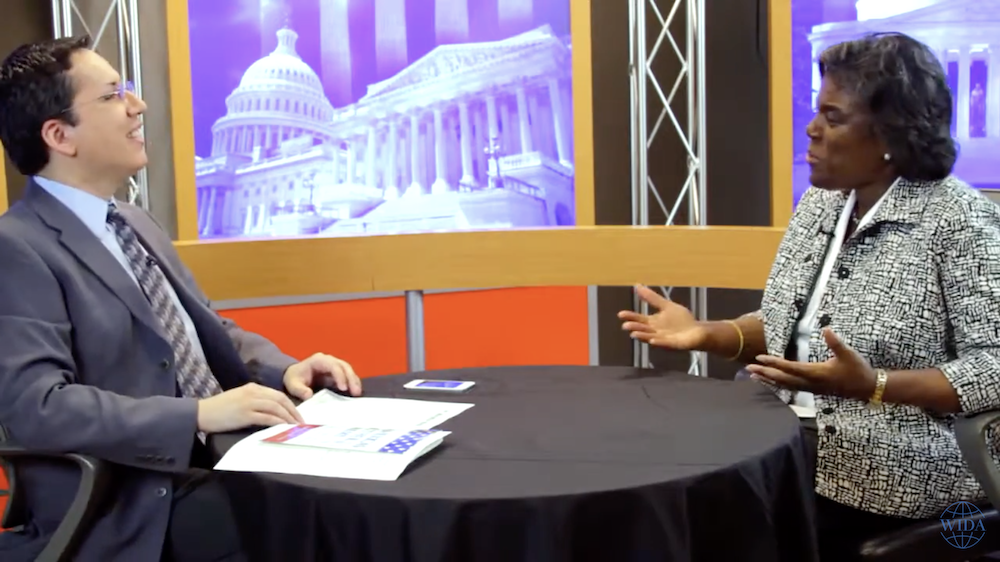 Ambassador Linda Thomas-Greenfield during a 2013 interview on the TV program “Conversations with Nicholas Kralev.” Photo courtesy of the author.

Linda Thomas-Greenfield was director-general of the U.S. Foreign Service for only 16 months, starting in 2012, but she took her job very seriously. It’s a peculiar, complex and tricky position — the incumbent doubles as the State Department’s director of human resources. You have to take care of about 70,000 employees working at some 275 diplomatic posts around the world, as well as in the United States. You have to solve institutional problems, improve the service’s general health and prepare it for future challenges and opportunities. And you have to make sure it recruits and trains the best possible workforce — in this case, those who represent the American people to the world.

“I’ve been named the chief recruiter,” Thomas-Greenfield told me in a 2013 interview (see video below). More than seven years later, she is on track to become a much more visible and even celebrated — albeit unofficial — recruiter. As U.S. ambassador to the United Nations, the post for which she has been tapped by President-elect Joseph R. Biden, she is likely to serve as an example and inspiration for young Americans, and even their peers in other countries — particularly for women and minorities.

In our interview, I asked Thomas-Greenfield for her pitch to prospective diplomats. “If you want a way of life that allows you to reinvent yourself every two to three years, please consider the Foreign Service. That’s my pitch,” she said. “I love the fact that every two to three years we can reinvent ourselves. You do a different job, you have different bosses, you are in a different country, you are meeting new friends, you are in a different house. You can look at your weaknesses from the previous assignment and self-correct. That’s what I love about being in the Foreign Service.”

The neglect and abuse that diplomacy and the State Department have suffered in the last four years have had a devastating impact on young Americans who, in normal times, might be interested in a Foreign Service career. The number of those taking the entrance exams decreased to less than half of the more than 20,000 applicants during Thomas-Greenfield’s tenure as director-general. There has been much talk about rebuilding the State Department as a priority for the incoming Biden administration, and she is currently heading the transition at the department.

Thomas-Greenfield joined the Foreign Service in 1982 and was posted to Jamaica, Nigeria, Gambia, Kenya, Pakistan, the U.S. mission to the United Nations in Geneva and in Washington. Just before serving as director-general, she was ambassador to Liberia. In 2013, she became assistant secretary of state for African affairs. In 2017, the Trump administration forced her out of the service, along with many other senior officers. In the last nearly four years, she was a senior vice president at the Albright Stonebridge Group, an advisory and consulting firm founded by former Secretary of State Madeleine Albright, where many former diplomats have found refuge since 2001.

Thomas-Greenfield also taught at Georgetown University and continued her recruitment efforts informally and one on one — I happened to witness one such effort in 2018, during office hours with a student.

Back when she was the official chief Foreign Service recruiter, in addition to directing a large recruitment office, she enjoyed “going out and meeting with young people,” she said in our 2013 interview. “Our recruitment is a bit different from the business sector,” she noted. “We don’t recruit people for jobs; we recruit them for careers and a way of life. So we want to attract people at a much earlier age than the day they graduate from college, because it’s a process getting into the Foreign Service. So we start early enticing people, encouraging them to know about the State Department.”


Diplomacy is among the most atypical of professions. The variety and unusual combination of skills it requires are difficult to come by. Thomas-Greenfield put it this way: “We look for people who are flexible, who know how to make decisions, people who are creative and innovative and can think on their feet.”

Thomas-Greenfield is likely to be confirmed by the Senate to lead the U.S. Mission to the United Nations in New York without difficulty. The nominee for her old job as Foreign Service direct-general will also require Senate confirmation. The next secretary of state, Antony Blinken, should choose wisely the occupant of that post — it may not be nearly as visible as the U.N. ambassador, but its importance to the service cannot be overstated.