Embassy Election Night Spectacular? Not in 2020

As Americans voted, guests weren’t invited to celebrate the occasion at most U.S. overseas posts for the first time in decades. 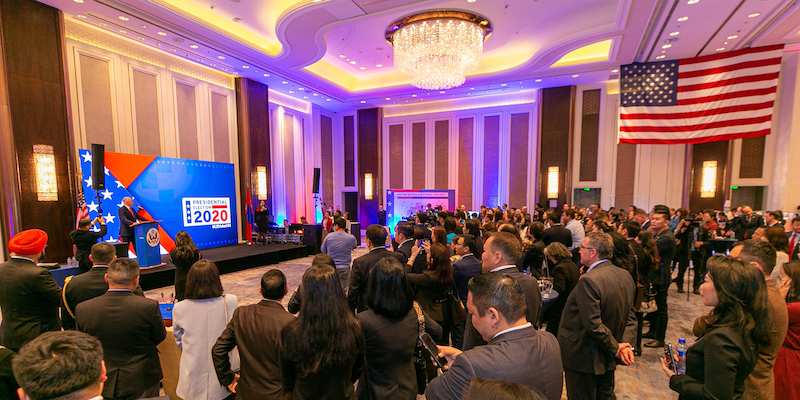 The U.S. Embassy in Mongolia was one of the few that hosted an Election Night party this year. Photo by U.S. Embassy Ulaanbaatar.

Crowds, cameras and canapés filled the ambassador’s residence, as did pundits and pollsters. For hundreds of guests at the Election Night spectacular, thrills came from tracking each state’s vote count in the Electoral College on a wall map and speculating on possible outcomes. As they jostled to take pictures with cardboard cutouts of the presidential candidates, they knew this election would break a barrier, no matter which candidate won: the first black president or the first female vice president.

Celebrations like this one at the U.S. Embassy in Caracas in 2008 have been a staple of American diplomacy around the world for decades. No other country’s elections capture as much interest among foreign publics and politicians, cognizant of the impact decisions in Washington have on their lives.

But not in 2020. Amid widespread shutdowns due to a worsening global pandemic, most embassies didn’t open their doors to the public on Election Night. Embassy Ulaanbaatar in Mongolia was one of the very few exceptions, mostly in Asia, where Covid-19 infections rates are lower than in the rest of the world. Embassies in other countries hosted virtual events, and some didn’t do anything at all. At a time of deep divisions in the United States, controversy about methods to combat the coronavirus and its effect on voting and counting, as well as candidates’ potential reactions to the results, further complicated embassy decisions on how to mark the occasion.

Diplomacy is about engagement and influence, and Election Night events aren’t just parties — they are among the best opportunities for American diplomats not only to showcase the U.S. democratic model, but to promote and further policy goals in the host-country as well. For example, the live media interviews my team and I, as the press officer and spokesperson, arranged for embassy officials on Election Day in 2008 aired repeatedly on major Venezuelan TV and radio outlets. We highlighted the best of free and fair elections, freedom of speech and other democratic principles, inclusive politics and good governance. The contrast with the authoritarian Venezuelan government’s policies and then-President Hugo Chavez’s routine and inflammatory anti-American rhetoric was obvious.

This year, however, the pandemic wasn’t the only challenge to U.S. diplomats’ efforts to showcase the best of America, and those efforts could have been seen as partisan or tone-deaf. No matter which option an embassy chose — in-person, virtual or no event at all — it faced potential criticism. Some State Department officials contacted regarding this article declined to comment on Election Night events at embassies or on the reasoning behind their choices.

The atmosphere in which they worked was precarious. Secretary of State Mike Pompeo faced a congressional ethics investigation for his August speech to the Republican National Convention while on official overseas travel funded by taxpayer resources. He also came under fire for domestic trips that seemed to ethics observers more like campaigning than diplomatic outreach. Career diplomats remain non-partisan in all official capacities, and election events don’t favor one candidate over another. Yet Pompeo’s actions and the reaction to them was another potential perception hurdle for Foreign Service officers to overcome when planning election programming.

As for Covid-19, in many countries, local government restrictions dictated if in-person events could be held. In recent weeks, Britain, Ireland, France, Spain, Greece and Germany were among those that announced new lockdowns in an effort to lower rising infection rates. In an October interview with The Connexion, a French news website for expats, the U.S. ambassador in Paris, Jamie McCourt, said her embassy would hold no in-person election event this year. “I cannot see how this is going to be possible this year,” she noted. Instead, the embassy tweeted information about the U.S. elections, as well as links to articles and a State Department-sponsored interactive election chat.

In countries with lower coronavirus rates, diplomats held in-person or hybrid events. In the Philippines, guests turned out to watch the results and visited historical exhibits on topics such as the 19th amendment, which legalized women’s voting rights. The ambassador to Australia, Arthur Culvahouse, gave a press conference highlighting the bipartisan nature of the U.S.-Australia relationship, which he said would continue regardless of the election’s outcome. In Mongolia, which has had only 356 total infections, according to press reports, guests gathered in a large hall for a more traditional Election Night event.

In Laos, a small group gathered at the American Center, and hundreds joined in virtually as embassy staff discussed the election, gave the audience a quiz and held a mock vote. In addition, Laotian journalists in the United States interviewed American voters. The embassy in Singapore didn’t host an event, though in a speech at the American Chamber of Commerce, Chargé d’Affaires Rafik Mansour highlighted the economic relationship and the medical school partnership between Duke University and the National University of Singapore.

Other posts waited until the day after the election. In Mali, Ambassador Dennis Hankins appeared on a talk show and a Facebook livestream discussion, fielding questions about counting votes in different states, the Electoral College and announcing results.

Embassy election-related activities are by no means a one-night stand. Presidential elections in particular provide yearlong opportunities for American diplomats to engage with the host-country’s government, media, civil society, academia and private sector on a variety of topics and policy goals that are key to the bilateral relationship. In the months before Election Day, embassies explain the voting process and show American citizens how to vote overseas.


In January, while serving as the public affairs officer at the embassy in Gabon, which also covers São Tomé and Príncipe, I explained the Electoral College to students in São Tomé. In Latvia, the embassy hosted a U.S. elections expert in early March, just before in-person gatherings ended. Then U.S. diplomats switched to virtual outreach globally, hosting social-media discussions and posting information about the election on their websites.

This year has been unusually challenging for embassies, as they have confronted questions about the incumbent president’s refusal to commit to a peaceful transition of power, another staple of American democracy, which diplomats often highlight as something other countries can aspire to. They might bring up the 2000 race between George W. Bush and Al Gore. Even though diplomats had to explain back then the confusing concepts of “hanging chads” and “butterfly ballots,” they also used the legal process that resolved the disputed election peacefully to educate foreign publics about the three branches of government.

The 2020 election may be over, but the work of American diplomats isn’t. In September, the Pew Research Center’s annual survey of global attitudes toward the United States showed the lowest levels since Pew began polling on this topic almost two decades ago. Raising those levels will fall on the new president’s shoulders, and he will need the Foreign Service’s help to get there.