When Diplomacy and Ethics Collide

I often faced choices that pitted my personal morals against what the organization required or demanded. 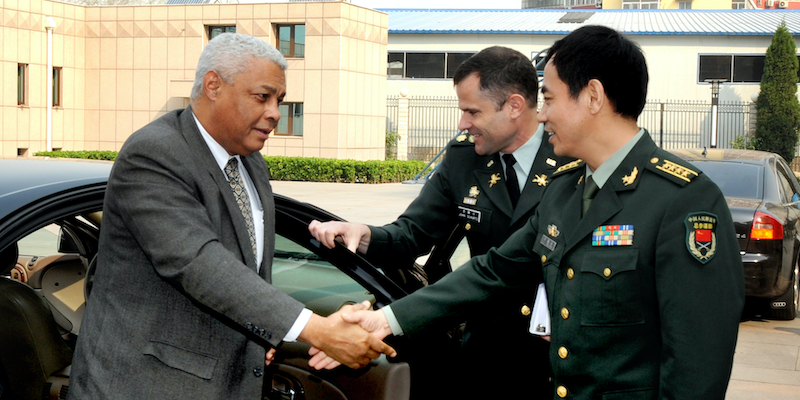 Dealing with nuance or compromise is not a strength of the American political system. The current cadre of politicians demonstrate an unwillingness to compromise, tend to ridicule and show contempt for anyone they consider an opponent, and impugn the motives of those who disagree with them. In such an environment, a Foreign Service officer (FSO) sent abroad to represent the United States who is not clad in the armor of integrity behind a strong shield of ethics will be hard-pressed to live up to the oath to “support and defend the Constitution of the United States against all enemies, foreign and domestic.”

An ethical lapse is a violation of laws or regulations. It’s usually easy to see on which side of the ethical line such actions fall. The State Department’s Foreign Affairs Manuals (FAMs) contain various department regulations. Ethical dilemmas, on the other hand, are those actions that fall into that gray area where there are no absolute rights or wrongs. These are complex situations arising from conflicts between the moral imperatives or ideology of two people, or the conflict between an individual’s moral principles and the demands of the position. Ethical dilemmas are complex situations, involving conflict between moral imperatives, so that to obey one is to violate the other.

An example of an ethical dilemma would be ordering an employee not to report on certain activities in the host-country, because this would be received unfavorably in the home-country. There is nothing illegal about this, and often it makes a certain amount of sense from the point of view of the person giving the order, since to upset higher headquarters can often have negative consequences. But failing to report accurately and completely to enable policy makers to have a full picture of the conditions in a country can also have negative consequences, thus the dilemma.

On a regular basis during my 30-year Foreign Service career, I faced choices that pitted my personal beliefs and morals against what the organization, or a superior within the organization, required or demanded. I had something of an advantage over many of my colleagues, who had come to the Foreign Service directly from school or academia, in that I had the benefit of 20 years of military ethos regarding personal integrity drummed into my mind. That prepared me to face ethical dilemmas with a better sense of self, the ability and willingness to question so-called authority. When I was faced with situations that fell into the gray area, rather than unquestioningly obey, or refuse outright, I was able to analyze the situation and look for an ethically acceptable (to me) course of action.

There is, however, another reason it’s important to understand how to deal with ethical dilemmas. I noticed during my career that there was a depressing tendency for people to “look the other way” when they encountered people involved in ethical lapses, or to “wait it out” and let the offender be transferred to become “someone else’s problem.” This kind of behavior is, to me, the biggest ethical dilemma of all — the question of personal responsibility for the ethical conduct of others.

My military training and background taught me that the commander, or person in charge, is responsible for everything his or her organization does or fails to do. Furthermore, every military officer is expected to take appropriate action whenever he or she becomes aware of violations of law, regulation or proper conduct. Members of a profession, especially the senior members, are stewards for that profession, responsible for protecting, perpetuating and preserving its values. This means being responsible for policing the behavior of those members who get out of line. If the Foreign Service is to merit the title “professional,” its members must do what all other professions do, and that means learning to effectively deal with ethical dilemmas and with the (hopefully) occasional ethical lapses of its members.

During my diplomatic career, I observed questionable behavior, often on a daily basis. While it didn’t violate any laws — although sometimes it came close — it was in conflict with the values I was taught by my grandmother and those I acquired during my military career. These are some of the issues in that gray area not covered by regulation, nor dealt with in the State Department’s training system.

Taking credit for the work of others

FSOs work in a highly competitive environment. Careers hang on the annual Employee Evaluation Report (EER), which is the main document used by promotion boards to decide on advancement in rank. The competitive environment in which FSOs work creates the need to show significant accomplishments on each annual EER, such as unique or notable reporting, creation of a new program, etc. What this often leads to, unfortunately, is a situation where individuals claim credit for work performed by others. Sometimes this might involve reviving an old program at the embassy or consulate and repackaging it as the brainchild of someone currently assigned or, even worse, having multiple individuals who are currently assigned to an organization claiming credit for the same program or activity.

Sometimes, the sharp eyes of members of promotion panels catch these stratagems, resulting in denied promotions for the individuals involved. Having served on several promotion panels, I know of no more serious consequences, and I’m sure that in many — if not most — cases, these practices go undetected or unremarked.

A more insidious form of the practice of taking credit is the supervisor who directs a subordinate to do a job, and then presents the completed job to his superiors as his work. It’s a fact of bureaucratic and organizational life that the boss always gets the credit for what his or her subordinates do, but it’s not meant for those subordinates to be written entirely out of the equation, nor is it meant that the boss claims sole credit.

Even at an early age, we humans learn the art of passing the buck. Some people grow into adulthood still incapable of accepting responsibility for their shortcomings. I once dealt with an individual who had blatantly violated several directives from Washington. When he was finally relieved from his post, instead of accepting responsibility for his actions, he blamed his “incompetent” staff for things going wrong. Years later, when I encountered him, he still did not understand why his tour of duty had been curtailed. This is, admittedly, an extreme example, but anyone who has ever worked in a bureaucracy likely has encountered similar behavior.

Bullying or abusing positions of authority

For too many people, positions of authority are considered free passes to have their way. Bullying in the workplace takes many forms — from demeaning an employee because of some individual trait to undermining an employee’s work or placing unreasonable demands. There are no federal laws that apply specifically to bullying, unless the bullying behavior overlaps with discriminatory harassment based on race, national origin, gender, color, age, disability or religion.

The Department of State has specific policies banning sexual harassment, a pernicious form of gender-based bullying, as well as harassment based on other federally recognized conditions. When the bullying or harassment doesn’t fall under one of the protected categories, however, there is no legal or rule-based remedy for the victim. For example, supervisors who yell at or otherwise verbally abuse subordinates, or who otherwise abuse their position of authority, are not subject to any sanctions — unless their supervisor takes action. I once worked for a supervisor who would routinely call me at night, on weekends and on holidays to fix some glitch he was having with his office computer. No matter how many times I showed him how to either fix the problem himself, or avoid it altogether, the calls continued for a two-year tour, and there was no one for me to turn to in order to remedy the situation.

FSOs and civil servants posted abroad must remain steadfast in espousing the principles of ethical integrity and professionalism that represent the highest values of the American socio-political experiment.