Expeditionary Diplomacy: Was It Worth It?

With Iraq and Afghanistan still dangerous and badly governed, a resounding yes eludes diplomats who served in war zones. 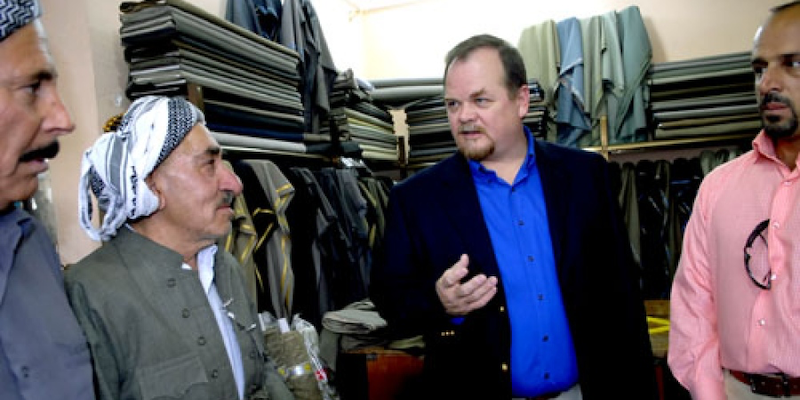 The 15-minute helicopter ride from the Baghdad airport over the Tigris River was familiar to me from trips with Secretaries of State Condoleezza Rice and Colin Powell, whom I had covered as a journalist years earlier. At the time, the U.S. Embassy was located at Saddam Hussein’s former Republican Palace. Now, in 2012, this was my first visit to the newly built and much talked about embassy, the largest in the world.

Expeditionary diplomacy was all the rage — the term was used to describe the civilian efforts to rebuild Iraq and Afghanistan, with the help of the U.S. military while it was fighting wars in the two countries. Thousands of members of the U.S. Foreign Service took part in those efforts, as they learned skills they never expected to need in diplomacy. We don’t hear much about expeditionary diplomacy anymore. But for years to come, many of the diplomats who risked their lives will return to a nagging question: Was it worth it?

That day in March 2012, I flew in from Erbil, the capital of the Kurdistan region in northern Iraq, on Embassy Air at the invitation of U.S. Ambassador James Jeffrey. Embassy Air was the name of an air service with a fleet of about 40 small passenger planes, which was used to transport personnel between various Iraqi cities, as well as to Kuwait and Jordan. Commercial international flights to Erbil were still preferable to using Baghdad’s airport, because Erbil was much safer and its airport was in many ways better than most U.S. airports. I was researching my book “America’s Other Army,” for which I would visit more than 80 embassies and consulates around the world.

At the embassy’s helipad in Baghdad, I was met by Michael McClellan, the deputy public affairs officer, after which we took a very short ride to the residential buildings, across the street from the embassy. My apartment — one of hundreds of furnished units — was modern but simple, and a far cry from the trailers I had slept in on my previous visits.

I quickly plunged into the embassy routine: Meetings in one of the two office buildings or the ambassador’s residence or the Green Bean Café not far from the post office; meals in the so-called DFAC, the military acronym for dining facility, where the abundance of food made it very easy to put on more pounds than one could shed at the embassy gym; drinks at Baghdaddy’s, the iconic bar that sometimes hosted concerts by Diplomatic Security agent Jim Combs. These and other facilities had been built because, for security reasons, employees were not allowed to visit outside establishments — except for a few officially approved ones. There wasn’t much more to do on the compound, so people worked almost all the time, including on weekends.

“We have thousands of people living here,” including local and third-country hires, as well as contractors, said Mark Hunter, a Diplomatic Security agent since 1986 who was the embassy’s chief security officer. There was a sophisticated threat-warning system, and announcements about possible incoming fire were made on average several times a day during my stay. “This technology has saved lives,” Hunter said. “You get a warning, and it gives people the time they need to seek shelter.”

That had not been the case at the old embassy, where diplomats lived in trailers. “The trailer next to mine was completely destroyed during my tour,” said James Miller, who served in Baghdad in 2007-2008. “People I worked closely with died — one was an Iraqi-American interpreter and the other was an Army major. We used to stay late at the office, and one of the reasons was, the less time you spent in your trailer, the less chance you had of being hit. We don’t get or deserve the credit soldiers do because they are on the front lines, but we don’t carry guns, either.”

As violence continued to be a frequent occurrence in 2012, the most challenging aspect of conducting business was the difficulty of movement outside the embassy compound. Since the military’s withdrawal from Iraq a few months earlier, private State Department contractors had been protecting embassy employees. “You can’t go anywhere without a lot of armed men,” said Douglas Silliman, the head of the embassy’s political section. “The security people are very good and try to be unobtrusive, but there are a lot of them. The ambassador and I are going to the Foreign Ministry today, and we’ll have a large security detail and several cars to take us to the Red Zone,” he said in reference to the space outside the heavily protected international zone, which is also known as the Green Zone.

It was much more dangerous in the so-called provincial reconstruction teams, civilian-military units across Iraq led by diplomats, which helped build schools, hospitals and parks, worked on water and electricity projects, as well as in the areas of transportation, industry, government capacity building and commerce. Most of those teams were housed by military bases and used trailers as living quarters, and sometimes even as offices. “Our office was in the Provincial Council building, so we would convoy out with the military from our base in the morning,” said Howard Keegan, a former Marine who led a team in the northeastern Kirkuk province.

The deadly ethnic violence he lived with was also familiar to Cameron Munter, who led the first provincial reconstruction team in Iraq — in Mosul, capital of the Nineveh Province. “Every time I left the base, I had nine gunners and three armored vehicles,” he said. “The bad guys would either shoot at us or try to hit us with roadside bombs. What was much more frequent than that was the so-called indirect fire — the shelling of the base with either mortars or rockets. That happened at some points daily.”

So was it worth it? With trillions of dollars spent, numerous lives lost, and both Iraq and Afghanistan still dangerous and badly governed, was expeditionary diplomacy a success? A resounding yes is difficult to come by, even if many diplomats believe their efforts improved the Iraqis’ lives. “We put the provincial government in touch with its constituents,” Munter said. “Provincial officials had never left Mosul to visit people outside the city. We actually flew them, with our soldiers, to meet with their constituents in small towns.” Department of Justice representatives “did seminars for judges to teach them the rules of conduct in court,” he added. “We’d also send people to supervise the prison in Mosul. An officer from the Army Corps of Engineers managed the tender process by which reconstruction was done in the province.”


Expeditionary diplomacy also brought the Foreign Service and the military closer than they had been since the Vietnam War. As commander of the Army’s 25th Infantry Division in northern Iraq in 2008 and 2009, Lieutenant General Robert Caslen developed a much better and more nuanced understanding of the Foreign Service while working with several provincial reconstruction teams. “Military people tend to be very structured and orderly, and State Department people are not necessarily like that,” he said. “But these wars are not structured and orderly. They are very complex and require interagency and intellectual solutions.” Caslen said the diplomats he encountered weren’t afraid to “get their hands dirty.” “I love working with them,” he said. “It’s a different culture, but it’s refreshing and educational. It’s good for us military dinosaurs to work with somebody who knows how to operate in complex environments.”

Still, the expenditure of more than $3 trillion on the wars in Iraq and Afghanistan, including hundreds of billions spent on reconstruction, is hard for many diplomats to come to terms with, given the difficulty of securing resources for peacetime diplomacy. One officer, who has served in Afghanistan and asked not to be named, said he was “personally offended” by the wars’ price tag.

“Frankly, I’m not convinced that what we’ve been doing in Iraq and Afghanistan is in the best interest of the United States,” he said. “The intentions were right, for the most part. But to be where we are in both countries, one has to ask, purely from a return-on-investment standpoint, what we’ve gained. What has our investment accomplished? What could we have done with a fraction of that money in the United States to look after our own citizens?”