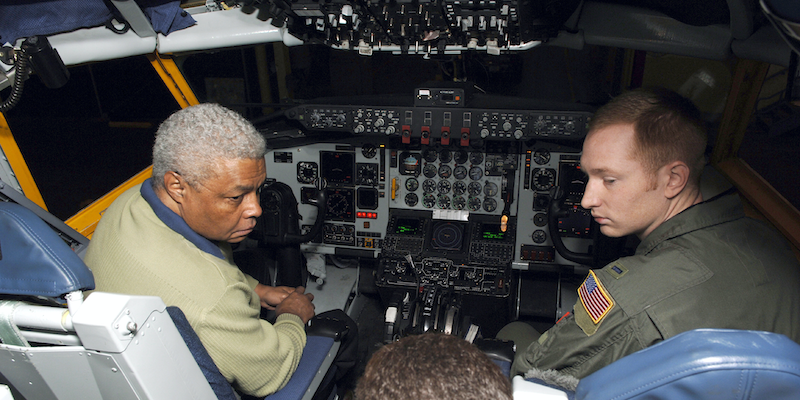 Ambassador Charles Ray (left) visited Fairchild Air Force Base in Washington State in 2007, while serving as a deputy assistant secretary of defense.

The young woman asked why I was coming to Hawaii. “I’m attending a conference,” I answered. More questions followed: Where was I coming from? What kind of work did I do? Where was I born? This interrogation, which was far from over, is familiar to many visitors to the United States going through immigration every day.

This border agent at the Honolulu airport, however, was firing a barrage of questions at an American citizen holding a diplomatic passport with the notation, “The bearer of this passport is the U.S. ambassador to the Kingdom of Cambodia.” I had been a Foreign Service officer since 1982, and as an African-American, mistreatment by border agents was no novelty to me. Although I was welcomed home on many occasions, I also encountered disrespect and rudeness much too often. Still, I was completely unprepared for what came next in my interaction with the young woman in Hawaii. As she proceeded to stamp my passport, I inquired politely why she had asked so many questions whose answers she could see in the passport. “I just wanted to make sure you spoke English,” she said suspiciously and sent me on my way. No apology. No “Welcome home,” either.

I was reminded of this and other similar experiences recently, when I read a harrowing and heartbreaking account of horrific harassment by Customs and Border Protection (CBP) agents of Tianna Spears, a black American who joined the Foreign Service in 2017 at age 25. The trauma she suffered from repeated mistreatment while crossing the U.S.-Mexico border during her first diplomatic posting through 2019 led her to leave the service after only two years. I was dismayed and disgusted, but unfortunately, not at all surprised — especially reading Spears’ blog post days after a Minneapolis police officer killed George Floyd, sparking the largest nationwide protests in more than half a century.

I retired from the U.S. Foreign Service in 2012, after serving for 30 years. In addition to Cambodia, I was ambassador to Zimbabwe, and the first U.S. consul-general in Ho Chi Minh City, Vietnam. I was also a deputy assistant secretary of defense for POW and missing personnel affairs. Even though the incident in Honolulu happened more than 15 years ago, I remember it as vividly as many other encounters with border agents, all of whom were white. Here are just two more.

On a flight from Tokyo around the same time, my seatmate was a young man who worked for the Department of Commerce. We struck up a conversation, and my job came up at one point. He was so impressed to have been sitting next to an ambassador that, when we arrived at the San Francisco airport and I let him ahead of me in the immigration line, he excitedly said to the officer that I was an ambassador. The officer, with a sullen look on his face, snatched my passport and said, “So what!” After looking at almost every page, he stamped it and dismissively tossed it back to me.

A couple of years later, when I worked at the Pentagon, I arrived late one night at the Miami airport. I was returning from a conference in Colombia, and my aide, an Air Force colonel in uniform, was carrying my briefcase. In the immigration line, he could clearly be heard calling me “sir” and “Mr. Ambassador.” But when it was my turn with the inspector, after looking at my diplomatic passport, complete with diplomatic visas, he asked me to step to the side. When I asked why, he just said sternly, “Sir, please step to the side! Someone will be with you shortly.” In a few minutes, a more senior officer came out. He walked a few paces with me, and then handed me my passport and apologized for the inconvenience and misunderstanding.


During the flight from Miami to Washington, my aide and I talked about the incident — by then I could even laugh about it. We speculated that they had a drug lookout notice with a name similar to mine. I just wondered if the person they were really interested in was a white-haired 63-year-old traveling with a military aide, which made us both laugh so hard that the flight attendant came to see what was happening. We told her the story, but she didn’t find it funny at all.

I could tell probably dozens of similar stories from the United States and other countries, including Britain and Germany, which illustrate that people of color, no matter their position or status, are still subjected to treatment that people who are not black or brown might find hard to believe.

That such incidents still happen in 2020 is disheartening, and it demonstrates just how much we still have to do in this country to live up to our ideals and make the words “All men are created equal” (and women too) fact rather than aspiration.