Diplomacy Across Cultures: Playing ‘Three-Dimensional Chess While Riding a Bicycle’

A guide to the professional applications of cross-cultural communication for diplomats. 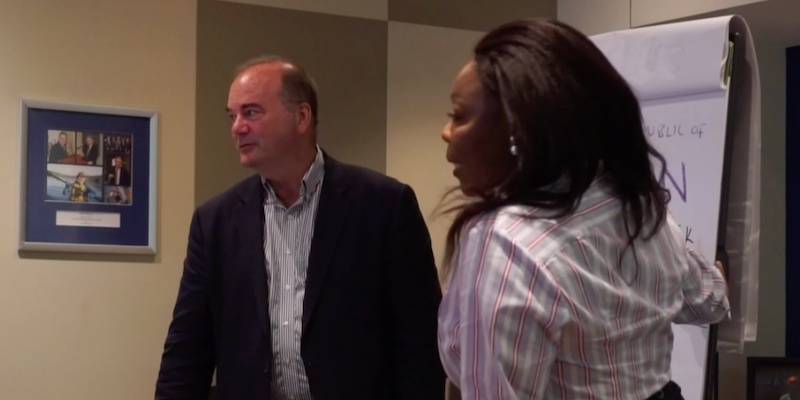 Most of us communicate across cultures every day, often without even realizing the distances and barriers that our ideas and feelings need to transcend. Those of us who work in the world of diplomacy have a more sharpened focus on the challenges of communicating across cultures. The better we understand this process, the more effective we will be as diplomats.

“Culture” is the way of life that people pass down from one generation to the next through learning. This information includes the values, beliefs, traditions and behaviors shared by members of an extended community. We learn culture first from our parents and families, then from our neighbors, teachers and religious leaders. The process of learning our primary culture is called “enculturation.”

Our culture envelops us and is our emotional home. If we lived in an entirely insular environment — if we were never to leave our homes and if we never encountered people from different cultures — then it would be hard for us to understand our own culture. Fish don’t see the water they swim in. We better understand ourselves when we interact with others.

When confronted with a new culture, we often experience “culture shock.” This is the disorientation, stress or discomfort that a person may feel when experiencing an unfamiliar way of life due to emigration or travel to a new country, a move between social environments, or an interaction with someone from a different background.

Those of us who learn a secondary culture go through the process of “acculturation,” which also may be repeated over the years if new and different cultures are encountered. This is not the experience of a tourist or someone who is otherwise skimming the surface of a new culture. Rather, it is a deep and immersive process, often including the learning of a new language. At some point in this process, a person begins to feel comfortable, perhaps even “at home.” Sometimes, when a person who has become successfully acculturated into a new environment returns to his or her primary culture, then “reverse culture shock” may result. Because this feeling of displacement may be entirely unexpected, it may be even more jarring than the original culture shock.

With globalization, a relatively new group of culturally conflicted individuals has emerged. So-called “third-culture kids” are young people who have accompanied their parents overseas and who have grown through their formative years without becoming fully enculturated to either their parents’ home culture or to the cultures they have experienced. Their disadvantage is that they may not feel “at home” anywhere. Their advantage is that they tend to become very flexible and observant individuals.

Any discussion of different cultures must include mention of the important differences between generalizations and stereotypes. For example, consider these two statements:

1. “Latinos are closed to outsiders; they only do business among themselves.”

2. “Trust is important in the Latino community; to do business, you first need to build relationships.”

The first statement is a stereotype while the second is a generalization. These two concepts are often confused, because they both involve making broad statements about a group of people. This is where the similarity ends. Stereotypes apply to everyone in a group, without exception, and they are retained even after countervailing evidence is presented. They are intellectually lazy and can be very hurtful. Generalizations, on the other hand, never apply to everyone in every situation. They represent a first guess or rule of thumb and can, therefore, be discarded when no longer accurate or useful. Generalizations are a tool for better understanding.

A diplomat must have a deeper understanding of a different culture, especially when serving abroad. A first step is usually learning a new language. But effective communication is more than just vocabulary and grammar. A crucial part of this process is learning the communication style of the new host country. Will your counterparts be direct or indirect? Should one first develop personal relations and engage in social interaction before getting down to business? Should a discussion take place in the office, in a restaurant over a meal, in a café over coffee, or maybe just over the phone?

One recent study offers some idea of this complexity. Prior to the current round of G-20 meetings, researchers analyzed member-states according to their national characteristics in five culture-based areas: power distance (centralized versus distributed decision making); individualism (valuing collectivist versus individual responsibility); assertiveness (competitiveness versus mutual support); uncertainty avoidance (comfort with predictability versus flexibility) and Confucian dynamism (short-term thinking versus long-term thinking).

The resulting spreadsheet was to be a guide for international diplomats trying to navigate cultural differences among the member-states. One government official who reviewed it said it looked like instructions for a dozen people to play three-dimensional chess while riding bicycles. He was not far off. But the nuggets of useful information were valuable.


One example: The United States had the highest possible ranking for individualism, so was it any wonder that many Americans feel uncomfortable supporting a policy of government-provided healthcare? Another example: China had the highest possible ranking for long-term thinking, so it was no surprise that Chinese representatives would feel comfortable implementing foreign policy decisions across decades, while Western governments would look to much shorter timeframes.

Diplomats who have served in both high-context (“to-be”) and low-context (“to-do”) cultures have noted dramatic differences in their work styles in different capitals. “To-be” colleagues generally favor face-to-face communication. They trust all of their senses, not just the words spoken or on a page. They value nonverbal communication and feel comfortable with long periods of silence, which they see as building rapport. With such partners, building trust takes patience, commitment and time.

On the contrary, “to-do” colleagues value the written or spoken word more than the context in which it is conveyed. They budget their time and respect those who do the same. An email or a quick phone call can easily replace a face-to-face meeting. Discussions, rather than having periods of silence, will have conversational overlaps. For “to-do” counterparts, completing their thought before they get to the end of a sentence is an indicator of agreement and collegiality, not bad manners.

There is no right or wrong culture. The true goal of successful cross-cultural understanding is realistic cultural empathy — an appreciation of difference that is not judgmental.

Jack Zetkulic is WIDA’s deputy director. A 26-year veteran of the U.S. Foreign Service, he has conducted and overseen training for both American and foreign diplomats.